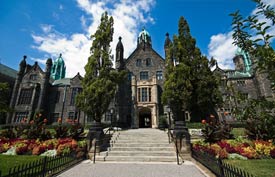 The University of Toronto

Originally named King's College, the University of Toronto was founded through royal charter in 1827. It was under the influence of the Church of England, but in 1827, it changed its name when it became a secular institution. Today, it is a public research university that is on the northern part of Toronto's Financial District near Queen's Park. It has a number of research institutes, academic faculties and teaching hospitals. It also has twelve different colleges that each has a history of its own, and they enjoy a significant amount of independence from one another.
... continued below

About The University of Toronto

The university offers personal support services. Among them are: personal counselling, community programs, recreational facilities, theaters, women's centres and student housing services. Their academic services include leadership development programs, writing labs, academic counselling and many others. Campus residences can hold an estimated 6,400 students, and undergraduates who are starting their first year in the university are guaranteed housing assistance by the institution. Each college in the university also has its own dining and residence halls in diverse areas of the campus.

The students are given many options to balance their studies with other activities that contribute to a more well-rounded academic experience. The importance of community involvement is emphasized, as well as sports that are funded by the university, such as hockey, football, track and field, basketball, and soccer. Other past time activities are also given importance, and the heart of their recreational lives revolves around Hart House, a place where they can gather around and do everything -- from swimming, playing billiards, debating, listening to a concert, having a haircut, reading in the library, dining, and visiting the art galleries. Hart House is designed to maintain a communal and holistic atmosphere among the students.

The main undergraduate faculty of the University of Toronto is the Faculty of Arts and Science. Its other programs are in the areas of Applied Science and Engineering, Music, Nursing, Pharmacy, Physical Education and Health, Architecture, Dentistry, Forestry, Information, Law, Medicine, Public Health, Public Policy and Governance, Social Work and Theology.

According to Maclean's magazine, the University of Toronto is the number one medical-doctor university, and it has maintained this position for twelve consecutive years. It places 18th in the Global University Ranking of Newsweek and 24th in the Academic Ranking of World Universities. Aside from this, it has placed second to Harvard for the number of produced co-authored or authored articles. It is also a consistent player in the top 5 U.S. universities that have the most citations given from many researchers around the world.

There are many notable achievements of the university. One of the most well-known breakthroughs that it has made is the discovery of stem cell research and insulin. Other of its most notable accomplishments are: multi-touch technology, the assimilation of Cygnus-X-1 as a blackhole, the Uranus moons of Caliban and Sycorax, the dwarf galaxies of Andromeda I, II and III, the supernova SN 1987A, computing technology, glycemic index, and Pablum, which is an infant cereal. Literary Criticism and Communication Theory also originated from this university.