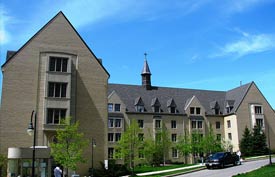 St. Michael's College started its first class in 1852 under the supervision of the Basilian Fathers. From its humble beginnings, the College has grown to become one of the biggest Catholic, English-speaking, post-secondary educational institution in Canada. Today, it is federated with the University of Toronto, and its mission is to become Canada's leading English-speaking Catholic Institute.
... continued below

The College has the Kelly Library, the Nouwen Archives, the USMC Archives, and the Sable Ctre 19th c French Studies. Residence accommodations are also offered by St. Michael's. The SMC Student Residence is the oldest residential community found at the University of Toronto. It is located on the eastern side of the St. George Campus, and it offers around 430 rooms for students within five buildings. The Loretto College Women's Residence is within the University of Toronto. It is owned by the Loretto Sisters, and its aim is to encourage students to join Christian and academic activities within the community.

All of the registered undergraduate students of St. Michael's belong to the St. Michael's College Student Union. This group plans numerous spiritual, athletic, and cultural activities to make the students' experience more fun and exciting. There are also other groups available to students. They can join the Mike newspaper (the official student newspaper of St. Michael's College); St. Mike's Residence Council (SMRC) (organizes social and athletic events); The Rabanus Project (social club for everyone who are connected to the Christianity and Culture Program of the University); COMPASS Catholic Fellowship (student evangelizers who share ideals and support in deepening the holiness of its members).

St. Michael's College offers more than 2,000 courses offered in 300 programs by the University of Toronto's Faculty of Arts and Science. They are divided into six admission categories: