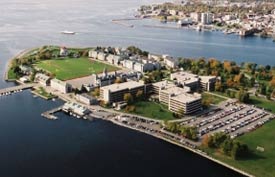 The Royal Military College of Canada (RMC) was created in 1874 "for the purpose of providing a complete education in all branches of military tactics, fortification, engineering, and general scientific knowledge in subjects connected with and necessary to thorough knowledge of the military profession." It opened its first class of eighteen cadets in 1876. Today, RMC is a military academy and a degree-granting university. It is also the only federal institution that can grant degrees to its students. It trains students in the four pillars of athletics, bilingualism (French and English), academics, and military. ... continued below

About Royal Military College of Canada

The University lives in a military environment, which means that all cadets are mandated to undergo physical fitness exercises, deportment, teamwork, cooperation, and drills. They are also expected to observe leadership of others and themselves, and develop a sense of self-discipline, duty, integrity, and self-confidence. Every cadet must pass through many levels in order to become a full-fledged Cadet wing member.

The First Year Orientation Period (FYOP) is one of the most challenging experiences for the students. It starts in the first month of the academic year, and cadets are required to maintain exceptional deportment and standard appearance. During this time, communication with the outer world is cut off from the cadet, and they are mandated to do many long periods of running up the Fort Henry, Ontario hill. The highlight of the event is the obstacle course, where it consists of thirteen obstacles with 12-foot walls and rope bridges. The entire course will last at an estimated 2 hours.

Many of the graduates have distinguished themselves in all aspects of Canadian military service. Some of them include: North West Rebellion of 1885, the South African War, the First and Second World Wars, Korea, and the Persian Gulf wars. Similarly, many ex-cadets have been prominently influential in many civilian professions.

Music and theatre is alive and well in the limestone city, thanks to Kingston's Grand Theatre (Kingston), Domino Theatre, Theatre Kingston and The Wellington Street Theatre, and other small groups that dot the downtown area. The Kingston Symphony Orchestra performs at The Grand Theatre, as do several amateur and semi-professional theatre groups.

Kingston's economy relies heavily on public sector institutions and establishments. The most important sectors are related to health care, education, government, tourism and culture, manufacturing, and research and development.