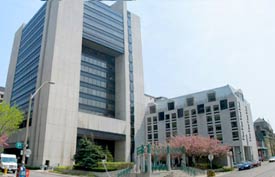 Originally called the Toronto Institute of Medical Technology, the Michener Institute was derived from the name of the 20th Canadian Governor General, Roland Michener. The college started as a pilot program that was developed by physicians and hospital-based medical technologists in 1958. This became the backdrop for the university's belief in the value of an educational environment combined with clinical education in a teaching hospital. The University is one of the few educational institutions in Ontario that focuses primarily in health care education. Its mission is to bring advanced information about health sciences for the improvement ... ... continued below

... of an individual or a community's health.

Michener uses state-of-the-art technology in its classroom and laboratories, and it takes pride in its highly-sophisticated health science technology. The institute has one of the most advanced radiation therapy labs with fully-equipped physiology and anatomy laboratories, microscopy labs, and computer facilities. Aside from these, they also have learning resource centres, Cafe 222 and Catering, Residence, and Fitness Facilities. Students who commute are given the option of owning paid parking lots or using the college's garage to store their bicycles. It also has a Print Shop that offers photocopying, binding, mounting, and laminating services. Students who plan to live inside the campus have the benefit of choosing from one of Michener's in-campus residence for students. Schatz Hall, a five-storey residence is assimilated inside the campus itself, so students have the convenience of not going outside to go to their campus. Schatz has fully furnished rooms that include private bathrooms, a common TV lounge for each floor, laundry and kitchen facilities.

The social environment of this Institute is active and close-knitted. Many long-lasting friendships are built here, and it's not difficult to find places to go out and have fun. There are pub nights, annual courtyard barbeques, scavenger hunts, and annual activities, such as Boat Cruises, Blue Jays baseball, Wonderland trips, St. Patrick's Day celebrations, Raptors basketball games, Intramural sports, Movie night-outs, Theater nights, Ski Trips, and many more.

There are seventeen full-time programs that the campus offers, and some of them include: Nuclear Medicine and Respiratory Therapy, Medical Laboratory Sciences, Anaesthesia Assistant, Genetics Technology, and Chiropody. Some of their bachelor's degree programs are tied up with other universities, such as Radiation Therapy (Laurentian University), Medical Radiation Sciences (University of Toronto), and Respiratory Therapy (Dalhousie University).

Michener holds small class sizes compared to other colleges. The ratio between student to a faculty member is only 12:1. This is small, compared to the average ratio of other colleges. Michener also believes in diversity learning, so it finds ways to make the classroom learning experience new and different. The university has partnered with 150 clinical sites from different institutions, so students not only have the option of learning inside the classroom; they also have the opportunity to broaden their experience by working in tandem with other colleges as well. There are also international clinical opportunities which are available to students in their final years of study.

In 2008, Michener Institute was named by Mediacorp Canada Incorporated as one of Greater Toronto's Top Employers for two years in a row.