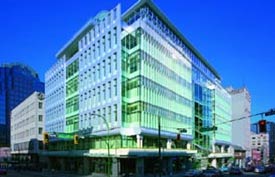 Columbia College was established in 1936, and it offers high school completion programs to many students. In the 1970’s, it started offering English as a Second Language Program as a response to the increasing number of foreign students who are studying at the College. Today, it is a melting pot of learners from around the world, representing the Pacific Rim area, Europe, Latin America, Africa, and the Middle East. Its mission is to “prepare international and Canadian students for admission to a university by providing quality academic programs in a supportive learning environment.” ... continued below

Columbia went back to downtown Vancouver to share facilities with the British Columbia Institute of Technology. Located in the heart of Vancouver, the school is home to Simon Fraser University’s campus and Vancouver Community College. It is also in the Educational Triangle of major independent and public institutions. Students can easily walk to the Public Library, the Orpheum Theatre, Queen Elizabeth Theatre, the Vancouver Art Gallery, recreational amenities in the YWCA and YMCA, and the Science World. The other facilities of the campus include: Tutorial Centre, Computer Centre, Laboratories, Bookstore, Health Services, and the Fitness Centre (2 treadmills, 2 elipticals, 3 upright and recumbent bikes, complete line of Atlantis Strength Conditioning equipment, over 4500 lbs. of dumbells, barbells and free weight equipment, length pool and jacuzzi, and change rooms and shower facilities).

New students who are entering Columbia are given an orientation before each semester. Students receive a welcoming remark form the Student Services team, receive previewed and planned academic programs, get more information about Columbia College and the typical lifestyle in Vancouver, understand more about medical/health and safety information, receive more information about homestay information, and meet volunteer Student Orientation Leaders. There are also various groups students can join, such as: Student Association of Columbia College, The Entrepreneurs Club, The Quitters’ Club (club to help students stop smoking), The Green Club (club for environmentalists), and the Current Activities Club.

The school, together with the other international schools in Vancouver, is one of the participants in the British Columbia International College Athletic Conference. Some of the sports offered are: Softball, Badminton, and Soccer. Other sport-related activities to choose from are: Basketball, Ice Hockey, and Volleyball. Students who want to go out and hang out with friends can go to the Student Lounge. It is open to everyone and equipped with vending machines, refrigerators, and microwaves. It also has a television, ping pong table, foosball, and pool table for students to use.