What do Funeral Directors Do 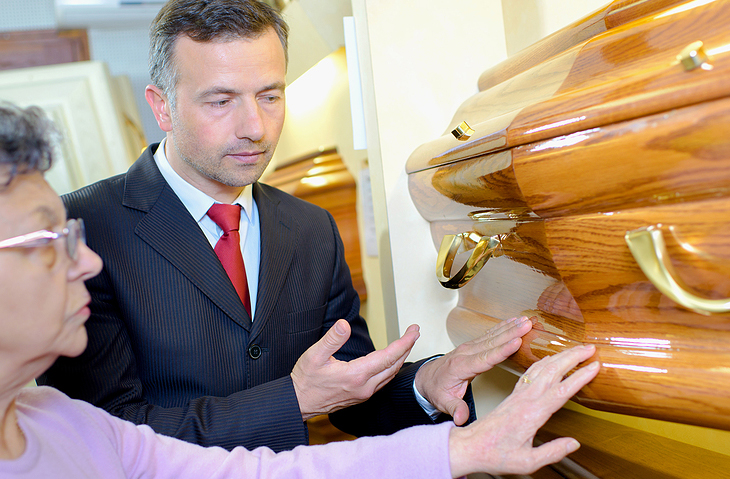 Funeral practices and rites vary greatly among cultures and religions. However, funeral practices usually share some common elements—removing the deceased to a mortuary, preparing the remains, performing a ceremony that honors the deceased and addresses the spiritual needs of the family, and carrying out final disposition of the deceased. Funeral directors arrange and direct these tasks for grieving families, taking great pride in their ability to provide comfort to family and friends of the deceased and in providing appropriate services.

Funeral directors, also called morticians and undertakers, arrange the details and handle the logistics of funerals, taking into account the wishes of the deceased and family members. Together with the family, funeral directors establish the location, dates, and times of wakes, memorial services, and burials. They arrange for a hearse to carry the body to the funeral home or mortuary.

Funeral directors prepare obituary notices and have them placed in newspapers, arrange for pallbearers and clergy, schedule the opening and closing of a grave with a representative of the cemetery, decorate and prepare the sites of all services, and provide transportation for the deceased, mourners, and flowers between sites. They also direct preparation and shipment of bodies for out-of-State burial.

Most funeral directors also are trained, licensed, and practicing embalmers. Embalming is a sanitary, cosmetic, and preservative process through which the body is prepared for interment. If more than 24 hours elapse between death and interment, State laws usually require that the remains be refrigerated or embalmed.

When embalming a body, funeral directors wash the body with germicidal soap and replace the blood with embalming fluid to preserve the tissues. They may reshape and reconstruct bodies using materials such as clay, cotton, plaster of Paris, and wax. They also may apply cosmetics to provide a natural appearance, dress the body, and place it in a casket. Funeral directors maintain records such as embalming reports and itemized lists of clothing or valuables delivered with the body. In large funeral homes, an embalming staff of two or more, plus several apprentices may be employed.

Funeral services may take place in a home, house of worship, funeral home, or at the gravesite or crematory. Some services are not religious, but many are. Funeral directors must be familiar with the funeral and burial customs of many faiths, ethnic groups, and fraternal organizations. For example, members of some religions seldom have the deceased embalmed or cremated.

Burial in a casket is the most common method of disposing of remains in the United States, although entombment also occurs. Cremation, which is the burning of the body in a special furnace, is increasingly selected because it can be less expensive and allows for the memorial service to be held at a more convenient time in the future when relatives and friends can come together. A funeral service followed by cremation need not be any different from a funeral service followed by a burial. Usually, cremated remains are placed in some type of permanent receptacle, or urn, before being committed to a final resting place. The urn may be buried, placed in an indoor or outdoor mausoleum or columbarium, or interred in a special urn garden that many cemeteries provide for cremated remains.

Funeral directors handle the paperwork involved with the person's death, including submitting papers to State authorities so that a formal death certificate may be issued and copies distributed to the heirs. They may help family members apply for veterans' burial benefits or notify the Social Security Administration of the death. Also, funeral directors may apply for the transfer of any pensions, insurance policies, or annuities on behalf of survivors.

Funeral directors also work with those who want to plan their own funerals in advance. This ensures that the client's wishes will be taken care of to their satisfaction.

Most funeral homes are small, family-run businesses, and many funeral directors are owner-operators or employees with managerial responsibilities. Funeral directors, therefore, are responsible for the success and the profitability of their businesses. Directors must keep records of expenses, purchases, and services rendered; prepare and send invoices for services; and file all required State and Federal employment reports and tax forms. Funeral directors increasingly use computers for billing, bookkeeping, and marketing. Some are beginning to use the Internet to communicate with clients who are planning their funerals in advance or to assist them by developing electronic obituaries and guest books. Directors strive to foster a cooperative spirit and friendly attitude among employees and a compassionate demeanor toward the families. Increasingly, funeral directors also help individuals adapt to changes in their lives following a death through aftercare services and support groups.

Most funeral directors work in funeral homes that have one or more viewing rooms, a casket-selection room, a preparation room, and sometimes a chapel. Some may also have a crematory on the premises. In general, the occupation is safe, but funeral directors occasionally come into contact with bodies that had contagious diseases, but when the appropriate safety and health regulations are followed the possibility of infection is remote. Funeral directors often work long, irregular hours, and the occupation can be highly stressful. Many are on call at all hours because they may be needed to remove remains in the middle of the night. Shift work sometimes is necessary because funeral home hours include evenings and weekends. In smaller funeral homes, working hours vary, but in larger establishments, employees usually work 8 hours a day, 5 or 6 days a week.

College programs in mortuary science usually last from 2 to 4 years. The American Board of Funeral Service Education accredits about 60 mortuary science programs. The majority are two-year associate degree programs offered at community colleges. About 6 colleges and universities offer programs that culminate in a bachelor’s degree. In addition, many specialized, stand alone funeral service institutions offer two-year programs, although some are 4 years in length. Mortuary science programs include courses in anatomy, physiology, pathology, embalming techniques, restorative art, business management, accounting and use of computers in funeral home management, and client services. They also include courses in the social sciences and in legal, ethical, and regulatory subjects such as psychology, grief counseling, oral and written communication, funeral service law, business law, and ethics.

Apprenticeships must be completed under the direction of an experienced and licensed funeral director. Some States require apprenticeships. Depending on State regulations, apprenticeships last from 1 to 3 years and may be served before, during, or after mortuary school. Apprenticeships provide practical experience in all facets of the funeral service, from embalming to transporting remains.

High school students can start preparing for a career as a funeral director by taking courses in biology and chemistry and participating in public speaking or debate clubs. Part-time or summer jobs in funeral homes also provide good experience. These jobs consist mostly of maintenance and cleanup tasks, such as washing and polishing limousines and hearses, but they can help students become familiar with the operation of funeral homes.

All States require funeral directors to be licensed. Licensing laws vary by State, but most require applicants to be 21 years old, have 2 years of formal education that includes studies in mortuary science, serve a 1-year apprenticeship, and pass a qualifying examination. After becoming licensed, new funeral directors may join the staff of a funeral home.

State board licensing examinations vary, but they usually consist of written and oral parts and include a demonstration of practical skills. People who want to work in another State may have to pass the examination for that State; however, some States have reciprocity arrangements and will grant licenses to funeral directors from another State without further examination. People interested in a career as a funeral director should contact their State licensing board for specific requirements.

To show proper respect and consideration for the families and the dead, funeral directors must dress appropriately. The professions usually require short, neat haircuts and trim beards, if any, for men. Suits and ties for men and comparable business attire, for women are customary.

Advancement opportunities generally are best in companies with multiple funeral homes. Funeral directors working for these companies may earn promotions to higher paying positions such as branch manager or general manager. Some directors eventually acquire enough money and experience to establish their own funeral home businesses.

Employment growth is expected to be as fast as average for all occupations. Job opportunities are expected to be good, particularly for funeral directors who also embalm.