What do Machinists Do 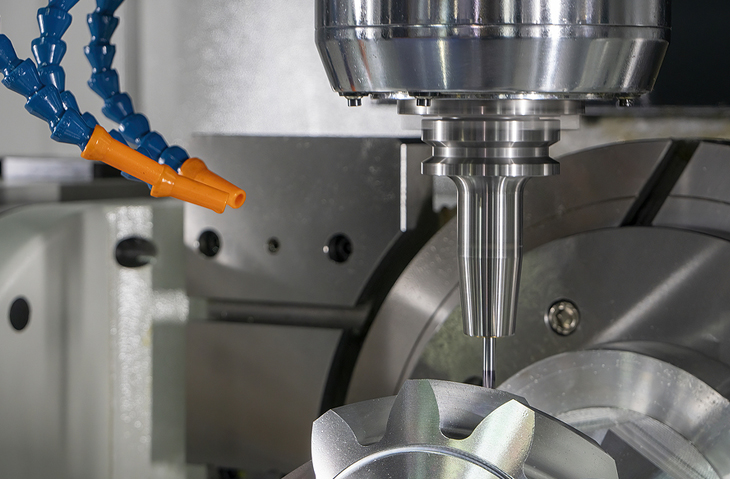 Machinists use machine tools, such as lathes, milling machines, and grinders, to produce precision metal parts. Although they may produce large quantities of one part, precision machinists often produce small batches or one-of-a-kind items. They use their knowledge of the working properties of metals and their skill with machine tools to plan and carry out the operations needed to make machined products that meet precise specifications. The parts that machinists make range from bolts to automobile pistons.

Machinists first review electronic or written blueprints or specifications for a job before they machine a part. Next, they calculate where to cut or bore into the workpiece—the piece of steel, aluminum, titanium, plastic, silicon, or any other material that is being shaped. They determine how fast to feed the workpiece into the machine and how much material to remove. They then select tools and materials for the job, plan the sequence of cutting and finishing operations, and mark the workpiece to show where cuts should be made.

After this layout work is completed, machinists perform the necessary machining operations. They position the workpiece on the machine tool—drill press, lathe, milling machine, or other type of machine—set the controls, and make the cuts. During the machining process, they must constantly monitor the feed rate and speed of the machine. Machinists also ensure that the workpiece is properly lubricated and cooled, because the machining of metal products generates a significant amount of heat. The temperature of the workpiece is a key concern, because most metals expand when heated; machinists must adjust the size of their cuts relative to the temperature.

During the cutting process, machinists detect problems by listening for specific sounds—for example, that of a dull cutting tool or excessive vibration. Dull cutting tools are removed and replaced. Cutting speeds are adjusted to compensate for harmonic vibrations, which can decrease the accuracy of cuts, particularly on newer high-speed spindles and lathes. After the work is completed, machinists use both simple and highly sophisticated measuring tools to check the accuracy of their work against the blueprints.

Some machinists, often called production machinists, may produce large quantities of one part, especially parts requiring the use of complex operations and great precision. Many modern machine tools are computer numerically controlled (CNC). CNC machines, following a computer program, control the cutting tool speed, change dull tools, and perform all necessary cuts to create a part. Frequently, machinists work with computer control programmers to determine how the automated equipment will cut a part. The machinist determines the cutting path, speed of the cut and the feed rate, and the programmer converts path, speed, and feed information into a set of instructions for the CNC machine tool. Many machinists must be able to use both manual and computer-controlled machinery in their job.

Because most machinists train in CNC programming, they may write basic programs themselves and often modify programs in response to problems encountered during test runs. Modifications, called offsets, not only fix problems, but they also improve efficiency by reducing manufacturing time and tool wear. After the production process is designed, computer control operators implement it by performing relatively simple and repetitive operations.

Some manufacturing techniques employ automated parts loaders, automatic tool changers, and computer controls, allowing machines to operate without anyone present. One production machinist, working 8 hours a day, might monitor equipment, replace worn cutting tools, check the accuracy of parts being produced, adjust offsets, and perform other tasks on several CNC machines that operate 24 hours a day. In the off-hours, during what is known as “lights out manufacturing,” which is the practice of running machines while the operators are not present, a factory may need only a few workers to monitor the entire factory.

Machinists held about 363,000 jobs in 2020. The largest employers of machinists were as follows:

Because machinists and tool and die makers may work with machine tools that present hazards, these workers must take precautions to avoid injuries. For example, workers must wear protective equipment, such as safety glasses to shield against bits of flying metal and earplugs to dampen the noise produced by machinery.

Many machinists and tool and die makers work full time during regular business hours. However, some work nights and weekends in facilities that operate around the clock. Some work more than 40 hours a week.

There are many different ways to become a skilled machinist. Many entrants previously have worked as machine setters, operators, or tenders. In high school, students should take math courses, especially trigonometry and geometry and, if available, courses in blueprint reading, metalworking, and drafting. Some advanced positions, such as those in the aircraft manufacturing industry, require the use of advanced applied calculus and physics. Due to the increasing use of computer controlled machinery, basic computer skills are needed before entering a training program. After high school, some machinists learn entirely on the job, but most acquire their skills in a mix of classroom and on-the-job training. Formal apprenticeship programs, typically sponsored by a union or manufacturer, are an excellent way to learn the job of machinist, but are often hard to get into. Apprentices usually must have a high school diploma, GED, or the equivalent; and most have taken algebra and trigonometry classes.

Apprenticeship programs consist of paid shop training and related classroom instruction lasting up to 4 years. In shop training, apprentices work almost full time and are supervised by an experienced machinist, while learning to operate various machine tools. Classroom instruction includes math, physics, materials science, blueprint reading, mechanical drawing, and quality and safety practices. In addition, as machine shops have increased their use of computer-controlled equipment, training in the operation and programming of CNC machine tools has become essential. Apprenticeship classes are often taught in cooperation with local community colleges or vocational-technical schools. A growing number of machinists are learning the trade through 2-year associate degree programs at community or technical colleges. Graduates of these programs still need significant on-the-job experience as machinists’ assistants before they are fully qualified.

People interested in becoming machinists should be mechanically inclined, have good problem-solving abilities, be able to work independently, and be able to do highly accurate work (tolerances may reach 50/1,000,000ths of an inch) that requires concentration and physical effort. Experience working with machine tools is helpful. In fact, many entrants have worked as machine setters, operators, or tenders.

As new automation is introduced, machinists normally receive additional training to update their skills. This training usually is provided by a representative of the equipment manufacturer or a local technical school. Some employers offer tuition reimbursement for job-related courses.

Machinists can advance in several ways. Experienced machinists may become CNC programmers, tool and die makers, or mold makers, or be promoted to supervisory or administrative positions in their firms. A few open their own machine shops.

Overall employment of machinists and tool and die makers is projected to grow 7 percent from 2020 to 2030, about as fast as the average for all occupations.

About 47,500 openings for machinists and tool and die makers are projected each year, on average, over the decade. Many of those openings are expected to result from the need to replace workers who transfer to different occupations or exit the labor force, such as to retire.

Employment of machinists is projected to grow 8 percent from 2020 to 2030, about as fast as the average for all occupations. Machinists will be required to set up, monitor, and maintain improved technology systems, such as computer numerically controlled (CNC) machine tools, autoloaders, high-speed machining, and lights-out manufacturing.

Employment of tool and die makers is projected to grow 2 percent from 2020 to 2030, slower than the average for all occupations. All of this projected employment growth reflects recovery from the COVID-19 recession that began in 2020, as overall demand for the services provided by these workers is expected to decline. Advances in automation, including CNC machine tools, reduce demand for tool and die makers to do certain tasks, such as programming how parts fit together.

In May 2021, the median annual wages for machinists in the top industries in which they worked were as follows:

In May 2021, the median annual wages for tool and die makers in the top industries in which they worked were as follows:

The pay of apprentices is tied to their skill level. As they reach specific levels of performance and experience, their pay increases.

Many machinists and tool and die makers work full time during regular business hours. However, some work nights and weekends in facilities that operate around the clock. Some work more than 40 hours a week.

Automotive Machinist
An Automotive Machinist program teaches a student to test, measure, machine and fit all repairable parts of a motor vehicle engine. Most graduates will also be able to completely disassemble an engine and rebuild it. The program will generally take 4 years to complete. An Automotive Machinist graduate will be able to read blueprints and understand the basic layout of most motor vehicle engines. A... more Machinist
The Machinist Program will teach a student how to turn blocks of metal into complex, intricate metal parts for other products. A student will also learn how to fit and assemble metal parts and sub-assemblies, ensuring the parts in these products meet exacting standards in size, strength and hardness. A student can usually complete the Machinist Program in 4 years. 20 of these weeks will... more