What do Fishers and Fishing Vessel Operators Do 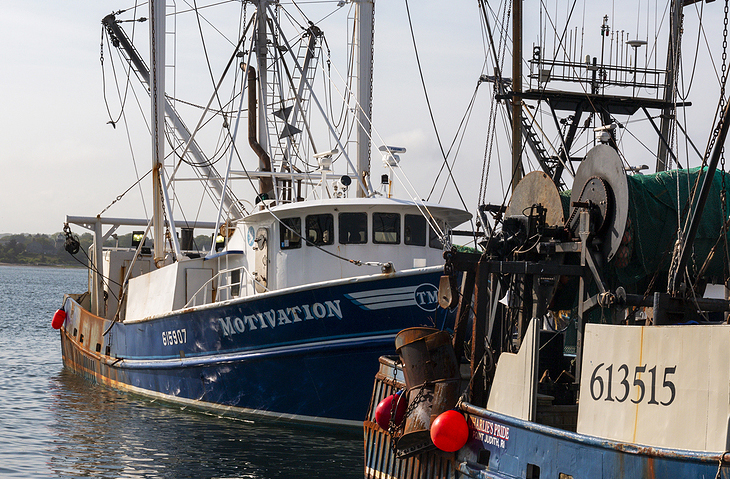 Fishing hundreds of miles from shore with commercial fishing vessels—large boats capable of hauling a catch of tens of thousands of pounds of fish—requires a crew that includes a captain, or skipper, a first mate and sometimes a second mate, a boatswain (called a deckboss on some smaller boats), and deckhands with specialized skills.

The fishing boat captain plans and oversees the fishing operation, the fish to be sought, the location of the best fishing grounds, the method of capture, the duration of the trip, and the sale of the catch.

The captain ensures that the fishing vessel is seaworthy; oversees the purchase of supplies, gear, and equipment, such as fuel, netting, and cables; obtains the required fishing permits and licenses; and hires qualified crew members and assigns their duties. The captain plots the vessel's course using compasses, charts, and electronic navigational equipment, such as loran systems or GPS navigation systems. Captains also use radar and sonar to avoid obstacles above and below the water and to detect fish. Sophisticated tracking technology allows captains to better locate schools of fish. The captain directs the fishing operation through subordinate officers' and records daily activities in the ship's log. In port, the captain sells the catch to wholesalers, food processors, or through a fish auction and ensures that each crew member receives the prearranged portion of the proceeds. Captains increasingly use the Internet to bypass processors and sell fish directly to consumers, grocery stores, and restaurants often even before they return to port.

The first mate is the captain's assistant and assumes control of the vessel when the captain is off duty. Duty shifts, called watches, usually last 6 hours. In this role, the first mate must be familiar with navigation requirements and the operation of all electronic equipment. The mate's regular duty though, with the help of the boatswain and under the captain's oversight, is to direct the fishing operations and sailing responsibilities of the deckhands, including the operation, maintenance, and repair of the vessel and the gathering, preservation, stowing, and unloading of the catch.

The boatswain, a highly experienced deckhand with supervisory responsibilities, directs the deckhands as they carry out the sailing and fishing operations. Before departure, the deckhands load equipment and supplies. When necessary, boatswains repair fishing gear, equipment, nets, and accessories. They operate the fishing gear, letting out and pulling in nets and lines, and extract the catch, such as cod, flounder, and tuna, from the nets or the lines' hooks. Deckhands use dip nets to prevent the escape of small fish and gaffs to facilitate the landing of large fish. They then wash, salt, ice, and stow away the catch. Deckhands also must ensure that decks are clear and clean at all times and that the vessel's engines and equipment are kept in good working order. Unless “lumpers” (laborers or longshore workers) are hired, the deckhands unload the catch.

Large fishing vessels that operate in deep water generally have technologically advanced equipment, and some may have facilities on board where the fish are processed and prepared for sale. Such vessels are equipped for long stays at sea and can perform the work of several smaller boats.

Some fishers work on small boats in relatively shallow waters, often in sight of land. Navigation and communication needs are vital and constant for almost all types of boats. On these small boats, crews often consist of one or two members who are involved in all aspects of the fishing operation. Their work might include placing gill nets across the mouths of rivers or inlets, entrapment nets in bays and lakes, or pots and traps for fish or shellfish such as lobsters and crabs. Dredges and scrapes are sometimes used to gather shellfish such as oysters and scallops. A very small proportion of commercial fishing is conducted as diving operations. Depending upon the water's depth, divers wearing regulation diving suits with an umbilical (air line) or a scuba outfit and equipment use spears to catch fish and use nets and other equipment to gather shellfish, coral, sea urchins, abalone, and sponges. In very shallow waters, fish are caught from small boats with an outboard motor, from rowboats, or by wading from shore. Fishers use a wide variety of hand-operated equipment, including nets, tongs, rakes, hoes, hooks, and shovels, to gather fish and shellfish; to catch amphibians and reptiles such as frogs and turtles; and to harvest marine vegetation such as Irish moss and kelp.

Although most fishers are involved in commercial fishing, some captains and deckhands use their expertise in fishing for sport or recreational purposes. For this type of fishing, a group of people charter a fishing vessel with a captain, and possibly several deckhands, for periods ranging from several hours to a number of days and embark upon sportfishing, socializing, and relaxation.

Fishing operations are conducted under various environmental conditions, depending on the region, body of water, and the kind of species sought. Storms, fog, and wind may hamper fishing vessels or cause them to suspend fishing operations and return to port. In relatively busy fisheries, boats have to take care to avoid collisions. Fishers and fishing vessel operators work under some of the most hazardous conditions of any occupation, and transportation to a hospital or doctor often is not readily available when injuries occur. The crew must be on guard against the danger of injury from malfunctioning fishing gear, entanglement in fishing nets and gear, slippery decks, ice formation in the winter, or being swept overboard by a large wave. Malfunctioning navigation or communication equipment may lead to collisions or shipwrecks. Fishers and fishing vessel operators endure strenuous outdoor work and long hours. Commercial fishing trips may require a stay of several weeks, or even months, hundreds of miles away from one's home port. The pace of work may vary, but even during travel between the home port and the fishing grounds deckhands on smaller boats usually try to finish their cleaning and maintenance duties so that there are no chores remaining to be done at port. However, lookout watches are a regular responsibility, and crew members must be prepared to stand watch at prearranged times of the day or night. Although fishing gear has improved, and operations have become more mechanized, netting and processing fish are strenuous activities. Newer vessels have improved living quarters and amenities such as television and shower stalls, but crews still experience the aggravations of confined quarters, continuous close personal contact, and the absence of family.

Most fishers begin as deckhands and learn their trade on the job. Deckhands normally start by finding work through family, friends, or simply walking around the docks and asking for employment. Some larger trawlers and processing ships are run by larger companies, where new workers can apply through the companies' human resources department. Operators of large commercial fishing vessels are required to complete a Coast Guard-approved training course. Students can expedite their entrance into these occupations by enrolling in 2-year vocational-technical programs offered by secondary schools. In addition, some community colleges and universities offer fishery technology and related programs that include courses in seamanship, vessel operations, marine safety, navigation, vessel repair and maintenance, health emergencies, and fishing gear technology. Secondary and postsecondary programs are normally offered in or near coastal areas, and usually include hands-on experience.

Experienced fishers may find short-term workshops especially useful. These generally are offered through various postsecondary institutions and provide a good working knowledge of electronic equipment used in navigation and communication and offer information on the latest improvements in fishing gear.

Captains and mates on large fishing vessels of at least 200 gross tons must be licensed. Captains of sportfishing boats used for charter, regardless of the boats' size, must also be licensed. Crew members on certain fish-processing vessels may need a merchant mariner's document. The U.S. Coast Guard issues these documents and licenses to individuals who meet the stipulated health, physical, and academic requirements. States set licensing requirements for boats operating in State waters, defined as inland waters and waters within 3 miles of the coast.

Fishers need a permit to fish in almost any water. Permits are distributed by States for State waters and by regional fishing councils for Federal waters. The permits specify the season when fishing is allowed, the type of fish that may be caught, and sometimes the type of fishing gear that is permissible.

Fishers must be in good health and possess physical strength. Good coordination, mechanical aptitude, and the ability to work under difficult or dangerous conditions are necessary to operate, maintain, and repair equipment and fishing gear. Fishers need stamina to work long hours at sea, often under difficult conditions. On large vessels, they must be able to work as members of a team. Fishers must be patient, yet always alert, to overcome the boredom of long watches when they are not engaged in fishing operations. The ability to assume any deckhand's functions on short notice is important. As supervisors, mates must be able to assume all duties, including the captain's, when necessary. The captain must be highly experienced, mature, and decisive and also must possess the skills needed to run business operations.

On fishing vessels, most fishers begin as deckhands. Experienced, reliable deckhands who display supervisory qualities may become boatswains, who, in turn, may become second mates, first mates, and, finally, captains. Deckhands who acquire experience and whose interests are in ship engineering - the maintenance and repair of ship engines and equipment - can eventually become licensed chief engineers on large commercial vessels after meeting the Coast Guard's experience, physical, and academic requirements. Almost all captains become self-employed, and the overwhelming majority eventually own, or have an interest in, one or more fishing ships. Some may choose to run a sport or recreational fishing operation.

Employment of fishers and fishing vessel operators is projected to decline moderately as regulations relating to the replenishment of fish stocks reduce allowable fishing.

Median annual wages of wage-and-salary fishers are $47,950. The middle 50 percent earned between $39,510 and $53,580. The bottom 10 percent earned less than $36,080, while the top 10 percent earned more than $65,930. Earnings of fishers and fishing vessel operators normally are highest in the summer and fall when demand for their catch and environmental conditions are favorable and lowest during the winter. Many full-time and most part-time workers supplement their income by working in other activities during the off-season. Earnings of fishers vary widely, depending upon their position, their ownership percentage of the vessel, the size of their ship, and the amount and value of the catch. The costs of the fishing operation such as fuel, repair and maintenance of gear and equipment, and the crew's supplies are deducted from the sale of the catch. Net proceeds are distributed among the crew members in accordance with a pre-arranged percentage. Generally, the ship's owner, usually its captain, receives half of the net proceeds. From this amount, the owner pays for depreciation, maintenance and repair, and replacement and insurance costs of the ship and its equipment; the money that remains is the owner's profit.