What do Roofers Do 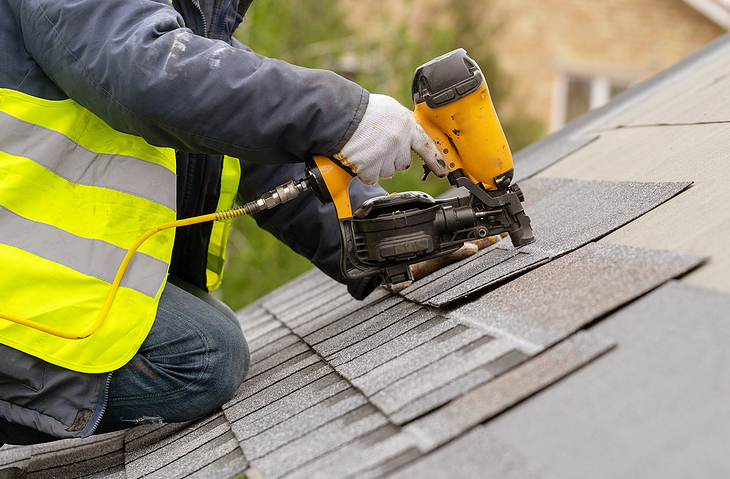 Roofers repair and install roofs made from a combination of some of the following: tar, asphalt, gravel, rubber, thermoplastic, metal, and shingles—all of which protect buildings and their contents from water damage. A leaky roof can damage ceilings, walls, and furnishings. Repair and reroofing—replacing old roofs on existing buildings—make up the majority of work for roofers.

Most low-slope roofs are covered with several layers of materials. Roofers begin by installing a layer of insulation on the roof deck, followed by applying a tarlike substance called molten bitumen on top of it. Next, they install overlapping layers of roofing felt—a fabric soaked in bitumen—over the surface. Roofers use a mop to spread hot bitumen over the felt before adding another layer of felt. This seals the seams and makes the surface waterproof. Roofers repeat these steps to build up the desired number of layers, called “plies.” The top layer is then glazed to make a smooth finish or has gravel embedded in the hot bitumen to create a rough surface.

An increasing number of low-slope roofs are covered with single-ply membranes of waterproof rubber or thermoplastic compounds. Roofers roll these sheets over the roof's insulation and seal the seams. Adhesive, mechanical fasteners, or stone ballast hold the sheets in place. Roofers must make sure the building is strong enough to hold the stone ballast.

A small but increasing number of buildings now have “green” roofs that incorporate landscape roofing systems. A landscape roofing system begins with a single or multiply waterproof layer. After it is proven to be leak free, roofers put a root barrier over it, and then layers of soil, in which trees and grass are planted. Roofers are responsible for making sure the roof is watertight and can endure the weight and water needs of the plants.

Most residential steep-slope roofs are covered with shingles. To apply shingles, roofers first lay, cut, and tack 3-foot strips of roofing felt over the entire roof. Starting from the bottom edge, roofers then nail overlapping rows of shingles to the roof. Roofers measure and cut the felt and shingles to fit intersecting roof surfaces and to fit around vent pipes and chimneys. Wherever two sections of the roof meet each other at an angle or where shingles reach a vent pipe or chimney, roofers cement or nail flashing-strips of metal or shingle over the joints to make them watertight. Finally, roofers cover exposed nail-heads with roofing cement or caulking to prevent water leakage. A similar process is used when installing tile, metal shingles, or shakes (rough wooden shingles).

Some roofers specialize in waterproofing or dampproofing masonry and concrete walls, floors, and foundations. To prepare surfaces for waterproofing, they hammer and chisel away rough spots or remove them with a rubbing brick before applying a coat of liquid waterproofing compound. They also may paint or spray surfaces with a waterproofing material or attach waterproofing membrane to surfaces. Roofers usually spray a bitumen-based coating on interior or exterior surfaces when dampproofing.

Roofers held about 153,700 jobs in 2020. The largest employers of roofers were as follows:

Roofing work is physically demanding because it involves climbing, bending, kneeling, and heavy lifting. Roofers work outdoors in extreme temperatures, but they usually do not work during inclement weather.

Although some roofers work alone, many work as part of a crew.

Workers may slip or fall from scaffolds, ladders, or roofs. They may also be burned by hot bitumen. Roofs can become extremely hot during the summer, causing heat-related illnesses. Roofers must wear proper safety equipment to reduce the risk of injuries.

Most roofers work full time. In northern states, roofing work may be limited during the winter months. During the busy summer months, roofers may work overtime to complete jobs.

A high school education, or its equivalent, is helpful and so are courses in mechanical drawing and basic mathematics. Although most workers learn roofing as helpers for experienced workers, some roofers train through 3-year apprenticeship programs administered by local union-management committees representing roofing contractors and locals of the United Union of Roofers, Waterproofers, and Allied Workers. Apprenticeship programs usually include at least 2,000 hours of paid long-term on-the-job training each year, plus a minimum of 144 hours of classroom instruction a year in tools and their use, arithmetic, safety, and other topics. On-the-job training for apprentices is similar to the training given to helpers, but an apprenticeship program is more structured and comprehensive. Apprentices, for example, also learn to dampproof and waterproof walls.

Trainees start by carrying equipment and material and erecting scaffolds and hoists. Within 2 or 3 months, they are taught to measure, cut, and fit roofing materials and, later, to lay asphalt or fiberglass shingles. Because some roofing materials are used infrequently, such as solar tiles, it can take several years to get experience working on all types of roofing.

Physical condition and strength, along with good balance, are essential for roofers. They cannot be afraid of heights. Experience with metal-working is helpful for workers who install metal roofing. Usually, apprentices must be at least 18 years old.

Roofers may advance to become supervisors or estimators for a roofing contractor or become independent contractors themselves.

Employment of roofers is projected to grow 5 percent from 2020 to 2030, slower than the average for all occupations.

Despite limited employment growth, about 15,600 openings for roofers are projected each year, on average, over the decade. Most of those openings are expected to result from the need to replace workers who transfer to different occupations or exit the labor force, such as to retire.

Much of the projected employment growth in this occupation is due to recovery from the COVID-19 recession that began in 2020.

In May 2021, the median annual wages for roofers in the top industries in which they worked were as follows:

Most roofers work full time. In northern states, roofing work may be limited during the winter months. During the busy summer months, roofers may work overtime to complete jobs.

The starting pay for apprentices is usually 50 percent of what journey workers receive. Apprentices get pay increases as they advance through the apprenticeship program.

Roofer
The Roofing Program is designed to teach students how to build and repair flat roofs - using hot asphalt, gravel and waterproof sheet materials. Roofers will also be taught how to build and repair sloped roofs - using asphalt and wood shingles, shakes and masonry or baked clay roofing tiles and metal materials. The Roofing Program usually takes 3 years to complete. 12 weeks of... more