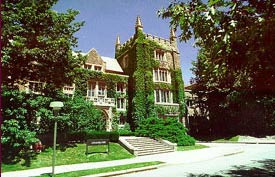 McMaster University was incorporated in 1887 under the terms of an act of the Legislative Assembly of Ontario. It is a prestigious public research university found in Hamilton, Ontario and was named after the prominent senator and banker, William McMaster. It was originally located in Toronto and functioned as a sectarian undergraduate institution for the Baptist Convention of Ontario. It moved to its present location in 1930 and became a private non-denominational institution in 1957. ... continued below

The main campus sits on 300 acres of land in a Westdale residential neighborhood. It has around fifty structures, with McMaster University Medical Centre considered to be one of the biggest buildings in Canada. It is bordered to the north by the marshes of Cootes Paradise and by Main Street West. McMaster also offers residences to its students. Currently, it has twelve smoke-free residence buildings that can accommodate around 3,800 students. More than just offering a place to stay, each residence hall provides support to new students in their transition to university life through its community advisers.

McMaster values community development among its students, and they encourage them to participate in the numerous resources and channels that it provides to make sure their students receive a well-rounded academic experience. The 120 clubs sponsored by the McMaster Student's Union cater to various interests, allowing students to express and explore their passions. Aside from this, the university’s sports and recreational programs stress the physical wellness of its students as an integral part in providing an enriching, holistic experience. Students can join the university varsity teams, participate in intramurals, or join The Pulse—the McMaster University’s state-of-the-art fitness facility. For entertainment, students can go to the Quarter, a student-run nightclub where they can have fun.

The institution is academically renowned in the fields of Health Sciences and Engineering. This reputation is supported by Maclean’s in its annual university rankings, naming it Canada’s Most Innovative Medical-Doctoral University eight times. In 2008, the McMaster University was ranked 48th in the world for its scientific papers in medicine by the Higher Education Evaluation and Accreditation Council of Taiwan. It has also received various awards and recognitions as a research institution. In 2004, it was named the Research University of the Year because of its ability to attract and capitalize on its research earnings.

Hamilton is a port city in the Canadian province of Ontario, which boasts a current population of roughly 500,000. Traditionally, the local economy has been led by the steel and heavy manufacturing industries. Within the last decade, there has been a shift towards the service sector, particularly health and sciences.

Hamilton is located on the western end of the Niagara Peninsula and wraps around the westernmost part of Lake Ontario; most of the city, including the downtown section, is on the south shore. Hamilton is situated in the geographic centre of the Golden Horseshoe and is roughly the midway point between Toronto and Buffalo.