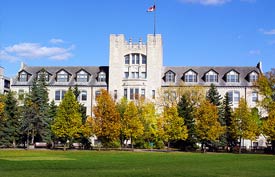 The University of Manitoba

The University of Manitoba was the first college institution that was built in western Canada. It was established on 1877 in Winnipeg, Manitoba. In the beginning, it was used to honor the degrees of students who are graduating from St John's College (Anglican), Manitoba College (Presbyterian), and St. Boniface College (Roman Catholic). Today, it is considered to be the largest university in Manitoba. ... continued below

About The University of Manitoba

The Bannatyne Campus has ten buildings that house the dental and medical studies of the university. Some of these include: Faculty of Medicine, Faculty of Dentistry, and the School of Medical Rehabilitation. Fort Garry Campus has an estimated 60 research and teaching buildings located on the Red River, Winnipeg, while the William Norrie Centre is the place for social work education.

The university offers Student Services, which include a large area of student programs given by the specific departments of Career Centre, Student Counselling, Student Advocacy and Resource Services [Advocacy, Chaplains, Disability Services and PlayCare], University Health Service, and International Centre for Students.

Many distinguished professors and researchers of the university have been given the most highly coveted Order of Canada (Arthur Braid, Henry Duckworth, Edward Lyons, Lloyd McGinnis, Arnold Naimark, William Norrie, and Francis Plummer) and/or the Order of Manitoba (Harvey Chochinov, Charles Curtis, Henry Friesen, Romulo Magsino, William Norrie, Evelyn Shapiro, Paul Thomas, and Jane Ursel) to honor their achievements in their field of specialization. Others have also been recognized by the Royal Society of Canada (Timothy Anna, Robert Ferguson, Gerald Friesen, Garry Martin, Alec Sehon, Vaclav Smil, and Kenneth Standing) -- the most esteemed award-giving body for scholars and scientists.

Winnipeg is the largest city and capital of the Canadian province of Manitoba. Winnipeg is located at the eastern edge of the prairie region of Western Canada, and, due to this, plays a prominent role in transportation, finance, manufacturing, agriculture and education. Winnipeg also lies in close proximity to hundreds of lakes, including Lake Winnipeg, Canada's fifth largest lake and the world's eleventh largest.

Winnipeg is the sunshine capital of Canada, with over 2300 hours of sun annually. Winnipeg has the second clearest skies year-round and is the second sunniest city in Canada in the winter.

Winnipeg is well known across the prairies for its arts and culture. The isolation of the city led to the development of many homegrown cultural institutions in theatre, music and dance. As the city developed, it became one of the main stops in Canada for artists as they travelled across Canada. It remains one of the top destinations today.