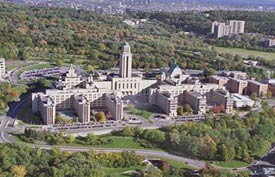 The University of Montreal

The University of Montreal was formed in 1878 in response to Universite Laval's decision to create a new branch in Montreal. Formerly known as Universite de Laval a Montreal, Montreal's prelate wanted it to become an independent university, and on May 8, 1919, Pope Benedict XV made it an autonomous institution. There are two schools affiliated with the university. One is the Ecole Polytechnique (school of Engineering), and Ecole des Hautes Etudes Commerciales, or HEC. ... continued below

About The University of Montreal

The main campus of the university is situated on Mount Royal's Outremont and Cote-des-Neiges boroughs. It has a lot of small shops and service establishments near it, such as hospitals, shops, cafe, library, movie houses, and cultural places. People can take the Universite-de-Montreal, Edouard-Montpetit and Cote-des-Neiges metro stations when going there. It also has four facilities in Laval, Quebec, Lanaudiere, and Longueuil. Students who plan to live near the campus can avail of the studio houses of the campus, with the added benefit of applying any time of the year. Typical amenities include kitchens and lounges in buildings to encourage group bonding with the other residents.

Some of the services offered by the university are: Student Employment, Lodging, Scholarships, Career Planning, Support for New Students, Health Care, Insurance, Student Disabilities, and many more.

There are many activities to participate in, with many services catering to all the interests of its students. One is the Cultural Sector Student Services, where it offers 100 training workshops in the fields of dance, cinema, theater, photography, communication, multimedia, languages, music, and visual arts. Les Belles Soirees is also another alternative, offering 350 conferences conducted annually by university professors on many diverse themes about political science, music, history, literature, psychology, and philosophy. For athletes, they can become a representative of the Canadian Interuniversity Sport -- The Carabins. This university team is ranked among the top ten university teams of Canada. Another alternative is to join one of the biggest sports complexes in Quebec: The Center for Physical Education and Sports of the University of Montreal (CEPSUM).