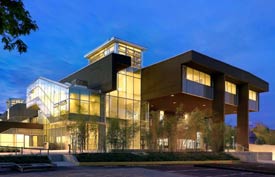 Langara College was established as an independent institution in April, 1994. Its name was taken from Spanish Admiral Juan de Langara, which is the name of the place the College is situated in. Their curriculum is based on a cross-disciplinary approach that is created to improve the student’s capacity to apply and transfer their knowledge. The institution values “free enquiry, integrity, mutual respect, professionalism, recognition of achievement, and social responsibility,” and its motto is “Freedom Through Knowledge.” ... continued below

The campus provides paid parking spaces for the students. The U-Pass Program is a mandatory transit program for all members of the Langara Students’ Union, which provides them unlimited access to TransLink Bus, Seabus services, and Skytrain throughout Metro Vancouver. There is also the bookstore, cafeteria (Chartwells Education Dining Services), Child Development Centre (Daycare), Gymnasium (it features 1 basketball court, 2 volleyball courts, or 6 badminton courts; Men's and Women's Washrooms and Changeroom; two classrooms; one computer lab, a Human Kinetics Testing and Assessment Lab), library, lockers, bike racks, and the ATM.

The Langara Students’ Union was formed in 1969, and is composed of all the registered students at Langara College. Its primary function is to protect and advocate the rights and interests of its members through actively working for positive change on issues that directly and indirectly affect the students, such as financial assistance or better transportation systems. The Students’ Union operates as a co-operative, and they provide services and practical utilities to its members, such as: book binding, fax/photocopier, Internet access, jumper cables, lockers, microwaves, ombudsperson, and student planners.

Langara has one of the best intercollegiate athletic programs in Canada. It is a member of the Columbia Colleges’ Athletic Association (BCCAA) and the Canadian Colleges Athletic Association (CCAA). In 1999, it also bagged the runner-up place for the Overall CCAA Sport Supremacy Award for their athletic accomplishments between 1974 and 1999. Some of the sports that they compete at are: Badminton, Men's Basketball, Women's Basketball, Men's Soccer, and Women's Soccer.