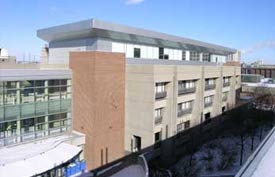 York University was founded in 1959 by the York University Act. Its first class was on September 1960 at the University of Toronto campus with a total of 76 students. It became affiliated with the University of Toronto but established its independence in 1965. Today, the University is considered to be the third largest university, and is popular for attracting students who are innovative and independent-minded. Its vision is “to create an interdisciplinary academic community of researchers, teachers and students whose first-rate credentials enable them to spearhead change and innovation in ways never before imagined,” and its mission is ... ... continued below

... to pursue, preserve, and disseminate knowledge. It values excellence in research, critical intellect, bilingual study, academic freedom, and social justice. The motto of the college is: Tentanda via "The way must be tried."

York's primary campus is Keele Campus. Its second campus is Glendon College. The last two decades have given way for York University to increase its buildings, such as the student centre, together with a new computer science, fine arts, and business administration buildings. Also added were the shopping mall and a hockey arena. The Masters tennis tournament uses the University's Rexall Centre tennis stadium perennially. The expansion of the Greater Toronto Area, especially near the Jane and Finch neighborhood is paving the way for York University to create a master plan that has a denser campus environment appropriate to the changes happening within the said locations.

Its Dance Department was founded by National Ballet of Canada’s first choreographer, Grant Stone. Its Centre for Vision Research has created and developed a “virtual reality room” coined as IVY (Immersive Virtual Environment at York) that studies spatial orientation and motion and gravity perception. This room is also used by the Canadian Space Agency and National Space Biomedical Research Institute (NSBRI). York’s Faculty of Science and Engineering recently participated in the 2007 NASA Phoenix Mars Mission.

There are three things that the University wants each of its students to experience during their stay at the campus: the first is to meet friends, the second one is to make a difference, and the third most important is to have fun. Meeting friends include joining the estimated 300 student clubs that include religious clubs, ethnic clubs, academic clubs and political groups. Another is to join York U, a student-run groups that organizes events for the students. Students can also join the thirteen student newspapers of the school, or they can belong to one of York’s nine colleges that houses study rooms, computer facilities, lounges, coffee shops, pubs, and residences. Students who are more religiously-inclined can meet others of similar values at the Scott Religious Centre. For the more athletic students, they can join the intramural competitions, sports clubs, and recreational clubs available in the campus. Students can join teams such as dragon boat, kendo, cricket, wrestling, dance, snowboarding, and rugby. Making a difference is important to the school, and it encourages students to be active at Student Government and join community outreach programs organized by their academic program or student clubs.

The University has been recognized for its excellence. York placed 115 out of 4000 universities in the Webometrics Ranking of World Universities in 2008. The Times 2007 (THES) World Rankings placed York University at 248th out of the top 400 universities. The overall grade of York University's on the 2009 College Sustainability Report Card of the Sustainable Endowments Institute was C+, and Maclean's 2008 Reputational Survey placed York 28th overall in its survey of over 11,000 qualified individuals.