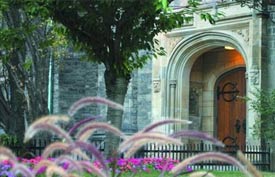 The University of Trinity College, once called Trinity College, was established in 1851 by the legislature of the Province of Canada. Today, it is considered to be one of the most prestigious of University of Toronto’s seven federated colleges, with around 1,700 undergraduate students in the Faculty of Arts and Science Department and around 140 students in the Faculty of Divinity, the oldest Anglican theological school in Canada. Its motto is: Met’agona stephanos (After the conquest, the crown). ... continued below

The construction of Body house and Cosgrave house in the 1950’s has formed a quadrangle that has remained a hub for students in the fall and academic sessions. In 2007, it was renovated, with added new designs of flagstone paths and Greek letter Chi. Other major landmarks of the campus include the Trinity Chapel, built in the Gothic architectural style; Back Field, bordered on the northern part by the Varsity Stadium and the by the Philosopher’s Walk on the western part; Junior Common Room, which is used by many student organizations; Strachan Hall, which is the central dining hall for students who live in the building; and St. Hilda’s College, another resident building offered by the College.

The University of Toronto Students' Union, which was formerly called the Students' Administrative Council, is the main representative of the students of Trinity College. Students who are a part of this organization are automatically members of the the Health and Dental Insurance Plan of the UTSU. In addition, they also will receive dental insurance and medical coverage. Each plan will cover for a year, beginning on September 1 and ending on August 31 of the year.

Students who want more extracurricular activities have a lot of options. Whether it be the The Trinity College Chapel Choir, which is under the direction of John Tuttle; the Solid Gold Dancers who entertain twice a year; Salterrae, the College newspaper; an International Relations Society; a variety of pubs, parties and formals; a film club; a bi-annual review of poetry, prose, art and photography; twenty intramural sports teams, including the famous Smashers (women's) touch football squad; or even an environmental committee, students are assured that there is a group that will fit their interests and skills at all times.

Trinity has two academic faculties, the Faculty of Divinity and the Faculty of Arts. It also has the International Relations, which is the main focal point in post-graduate research.

The College has maintained the highest proportion of students who have graduated with “Distinction” or “High Distinction.” Most of its graduates have taken professional or graduate degrees, and the college has contributed 35 Rhodes Scholars.