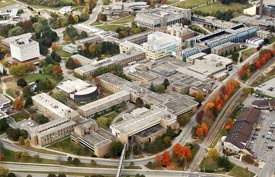 The University of Waterloo

About The University of Waterloo

The university is located in Waterloo, Ontario, which is along the University Avenue. A lot of residential and commercial buildings were created over the past few decades, and since then, its expansion has greatly urbanized its surroundings. Students who plan to live inside the UW Residences, Renison, St. Jerome's and St. Paul's campuses can have a guaranteed slot if they meet the school's requirements: They are accepted to a first-year program; they have received an offer of Admission that is dated at a given date; the students should have accepted the Offer of Admission not later than the deadline give by the administration, and they are able to submit their Residence Community Ranking Form and a non-refundable deposit of $500.

There are around 160 student clubs and associations in the university, and some of them include: Aboriginal Students Association, Business Club, Caribbean Students Association, Debating Society, Photography Club, Quiz Bowl, Swing and Social Dance Club, Waterloo Christian Fellowship. It also has its own student government (Federation of Students), a Campus Response Team, Co-op Student Services, Fed Bus, Feds Dental Plan, Food Bank, and Grand River Transit Bus Passes. There are also student societies, with their most recent events including the Annual Formals and Semi-Formals, Poker Tournament to Niagara Falls, and Wheelchair Basketball and Scavenger Hunts.

The university is often dubbed the "Silicon Valley of the North," because many Canadian knowledge-based spin-off companies are often a product of Waterloo. It is also considered one of the best engineering institutes in Canada, ranking 4th overall among the 24 participants who joined the 2008 North American Solar Car Challenge from the United States, Canada, UK, and Germany. In addition, the university was globally ranked by the Times Higher Education World University Rankings in 2008 as 30th in technology, 108th in social sciences, and 42nd in natural sciences. Its overall ranking is 129th. Maclean's magazine has also ranked Waterloo, placing it on the top three universities in its comprehensive ranking 13 times out of the 15 times the rankings were made. Maclean's primary reason was the university's competence in teaching Engineering, Math, and Computer Science. In addition, Maclean's also mentions the success of the university's 100 graduate co-op and undergraduate programs.

The University of Waterloo is known as the first North American university that created the Faculty of Mathematics. It has also one of the biggest co-operative education programs in the world.

Waterloo is a city in Ontario, Canada. Waterloo has a service-oriented economy with healthy insurance and high-tech sectors as well as two major universities. The city's largest employers are Sun Life Financial/Clarica, the University of Waterloo, Manulife Financial, Research In Motion, and Wilfrid Laurier University.

Many other high-tech companies, with headquarters elsewhere, take advantage of the concentration of high-tech employees in the Waterloo area, and have research and development centres here. Sybase, Google, Oracle, Adobe, McAfee, NCR Corporation and Agfa are among the large, international technology companies with development offices in Waterloo.