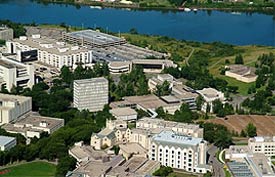 The University of Saskatchewan

The University of Saskatchewan is a coed public university. It started as an agricultural college in 1907, and became a Canadian university in 1910. Its logo is a book of knowledge and three wheat sheaves inside a green shield. On its pages is the Latin phrase and motto: Deo et Patriae, which means "God and Country". ... continued below
Scholarships for The University of Saskatchewan
Bernard Michel Scholarship
Education Sector Scholarships
Grand Lodge of Saskatchewan Education Bursary
Gilbert and Gay Cook Memorial Award
Robinson Memorial Bursary

About The University of Saskatchewan

Saskatchewan has a lot of places where students can stay during the course of their study at the campus. The Voyageur Place Room, once called the University Hall, is an example of this. It was organized on the house system where residences were named after Saskatchewan's early explorers. The first three male houses were the Hearne House (Samuel Hearne), Kelsey (Henry Kelsey), Lav (Pierre Gaultier de Varennes, sieur de La Verendrye). For females, there were Pond (Peter Pond), Henday (Anthony Henday), and Palliser (John Palliser) Today, Voyageur has four separate halls: Saskatchewan Hall, which was completed in 1912 and considered to be the first residence in the campus. It can house 150 students. Another hall is Qu'Appelle, whose original name was Student's Residence Number 2. It was opened in 1916. The Athabasca Hall has 270 residences, and this co-ed hall was named after the Athabasca River. Another residence complex in the southern part of the university is McEown Park. It has Souris Hall, Assiniboine Hall, Wollaston Hall, and Seager Wheeler Hall. Last February 2009, the government gave Saskatchewan $15 million as funding for addtional residence buildings adjacent to McEwon Park. Full occupancy will be on 2011.

There are many student organizations and clubs inside the university. Students who are into Arts can join the Wind Orchestra, University Chorus, U of S Ballroom Dancing Club, Theatre Camps, School of Dance, Other Music Ensembles, Music Theatre, Jazz Ensemble, Greystone Theatre, Greystone Singers, Department of Music, Department of Drama, and Concert Band. They can also join student groups such as: Campus Clubs, Edward’s School of Business, Greystone Scholars Society, Indigenous Students Council, International Student Associations, and St. Thomas.

The city has four distinct seasons. Extreme temperatures range from -50?C in winter to 41?C in summer. Saskatoon is fairly dry with the summer being the wettest season. A positive aspect of the low precipitation is that Saskatoon is one of the sunniest cities in Canada, averaging 2,381 hours of bright sunshine annually.