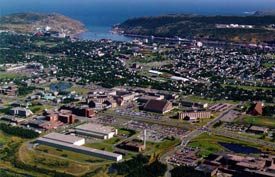 About Memorial University of Newfoundland

The University has four main campuses, with two additional satellite campuses in the regions of Labrador and Newfoundland. MUN’s largest campus is St. John’s campus, and majority of its academic buildings are situated within the southern part of Prince Philip Drive. Some of these include: the Science Building, Chemistry and Physics, Arts and Administration Building, Mathematics, Education, Music, the Inco Innovation Centre, and the Physical Education Centre. The Commons (main floor of the library) houses the Digital Media Centre, while the University Centre includes the bookstore, food court, campus bar (“Breezeway”), and the campus radio station (CHMR-FM).

The Marine Institute, also within the St. John’s, has full ships bridge stimulator and the biggest flume tank. MUN accommodates students who wish to live inside the campus. They can choose from two residential complexes: Burton’s Pond and Paton College. Burton’s Pond is an apartment-styled complex, and has four “Courts” which can house approximately 500 students in four bedroom apartments. Paton College dormitories can accommodate around 1000 students in ten residences which they call “Houses”.

Students who plan to live outside the campus can access the Memorial University’s Off-Campus Housing Office. They keep an up-to-date list of rental properties in and around the city, and they are an excellent and credible source for students who are trying to find accommodations, subletters, housemates and landlords.

St. John's is a thriving city where the nightlife is always alive and exciting, shopping is plentiful, sports and cultural centres are all in the heart of the city. Economic development in Newfoundland and Labrador has boomed in the last few years, with offshore oil development, manufacturing opportunities and a growing tourism industry. Marine Institute is uniquely positioned in a province where old and new, and tradition and technology meet and where its closeness to Europe and the rest of North America means the best of both worlds.

St. John's is the provincial capital of Newfoundland and Labrador, Canada. The city is located on the northeast coast of the Avalon Peninsula in southeastern Newfoundland, and on the Atlantic Ocean. It is the most easterly city in North America, as well as the second largest city in Atlantic Canada.

The city's economy is growing quickly, and the city has been identified as having one of the highest proportion of scientists and engineers per capita of any city under one million population in North America. Today, its continued growth is as much tied to what lies beneath the ocean " oil and gas " as what swims in or travels across the ocean.

Of all major cities in Canada, St John's is the cloudiest, snowiest, and has the most wet days per year. However, St. John's has the third mildest winter in comparison to other Canadian cities.