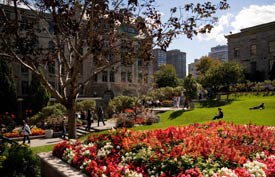 McGill University is a public research college that was established in 1821. Its name was taken from James McGill, a famous French-speaking merchant from Scotland. McGill is considered to be one of the oldest Canadian universities, having transformed itself from a private institution to a public institution. Its motto is: Grandescunt Aucta Labore, which means "By hard work, all things increase and grow." ... continued below

McGill’s main campus is situated at the Mount Royal in Downtown Montreal. Its second campus is Macdonald Campus, located in Sainte-Anne-de-Bellevue. Its Health Centre is in partnership with five independent teaching hospitals for many years, and they have the tradition of collaborating with other Montreal hospitals. Some of the teaching hospitals that McGill is affiliated with are: Montreal Neurological Hospital, Montreal General Hospital, Montreal Children's Hospital, Royal Victoria Hospital, and Montreal Chest Institute.

In 2006, the University has received $1.6 Billion for the redevelopment of the McGill University Health Centre (MUHC). This will expand the facilities into two independent campuses and merge the diverse hospitals of the MUHC on Glen Yards. It is expected to be completed by 2010.

The University offers housing services to students. Most of the incoming first-year students live in the Bishop Mountain Residences which consist of McConnell Hall, Gardner Hall, Molson Hall, and Douglas Hall. The second largest residence is the Royal Victoria College, a “women’s only” dormitory. Other residences include a four-star hotel that was transformed to The New Residence Hall. Another is the Solin Hall, an apartment-style accommodation.

One notable residential service is the First Peoples’ House, which is adjacent to the main campus. Aboriginal students are the first priority when it comes to accommodation, and any remaining spaces will be given to the other resident students. It has a student lounge / resource centres with large common kitchens, and common rooms for watching TV, studying, eating, or just hanging out with friends. It also comes with single-sized bed and mattresses, desk and study chairs, operated laundry facilities, ID Card access, night table, vertical blinds, bookshelf, electricity, hot water and heat. Most of the rooms are wired for the use of internet and telephone, although they are not included in the rental payment and must be negotiated with McGill’s REZ Voice and Data Service.

The Students’ Society of McGill University (SSMU) and the Post-Graduate Students’ Society of McGill University (PGSS) are two of the most active students’ associations at the campus today. There are also hundreds of student organizations and clubs to choose from. Some of the student organizations are internationally-acclaimed, such as the International Relations Students Association of McGill (IRSAM), which works with UN’s Economic and Social Council and the United Nations Educational, Scientific and Cultural Organization. The University also has two English-language student-run newspapers: McGill Daily, an independent publication and the McGill Tribune. The Daily, which publishes twice a week, is the oldest daily student paper in Canada. The Red Herring is the main satire magazine, TVMcGill is the University TV and Internet Station. The campus radio station is the CKUT (90.3 FM).

The University is represented by the men’s McGill Redmen and the women’s McGill Martlets in the Canadian Interuniversity Sport (CIS). The campus has many sport and exercise facilities which include: McConnell Arena, Forbes Field, Molson Stadium, Tomlinson Hall, the McGill Sports Centre (which includes the Tomilson Fieldhouse and the Windsor Varsity Clinic), Memorial Pool, many outdoor tennis courts and other extra-curricular arenas and faculties. The Macdonald Campus also has a gymnasium, an arena, a tennis court, a pool, fitness centres and green space for regular use. The university's largest sporting venue is the Molson Stadium.

Some of the most famous and notable people who studied at McGill are: Charles Taylor, Templeton Prize winner; John Ralston Saul, a Companion of the Order of Canada; Sam Roberts, Juno Award Winner; William Shatner, winner of several Emmy awards; Vaira Vike-Freiberga, President of the Republic of Latvia; Ahmed Nazif, youngest Prime Minister of Egypt, and Henry Mintzberg, management thinker.

Montreal is the second-largest city in Canada and the largest city in the province of Quebec. A cultural heart of classical art and the venue for many summer festivals, the Place des Arts is a complex of different concert and theatre halls surrounding a large open-spaced square in the downtown.

Montreal is known for contrast between old and new architecture. Architecture and cobbled streets in Old Montreal have been maintained or restored to keep the look of the city in its earliest days as a settlement, and horse-drawn calÃ¨ches help maintain that image.