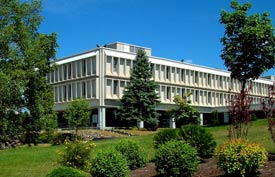 Laurentian University is a mid-sized bilingual university in Ontario, Canada. It was founded in 1960, and its main focus is to provide undergraduate programs to its students. It is also the largest bilingual provider of distance education in Canada. In 2005, it opened Northern Ontario School of Medicine, a consortium between Lakehead and Laurentian University. The school offers graduate-level medical degrees to students who would like to pursue a career in medicine. ... continued below

Students who plan to live in one of the campus' residences can choose among many supervised homes that are situated at the main campus. Some of them are: The Single Student Residence (SSR) and University College Residence (UC), both apartment style complexes; Married/Mature Student Residence (MSR), furnished apartments for students who are 21 years older and above; University College Residence (UC), a ten story co-ed building, and Huntington University, a dormitory-style complex residential unit.

Laurentian has an English and French campus radio station, known as CKLU (FM 96.7). It takes pride in its varsity teams, popularly known as the Lady Vees for the women's teams, and the Voyageurs for the men's teams. They compete in different sports competitions, particularly golf, basketball, soccer, running, swimming, golf, cross-country running, Nordic skiing, and lacrosse. The Lady Vees, particularly their basketball team, is one of the most successful teams in the history of the Canadian InterUniversity Sport Women's Basketball Championship.

Laurentian University offers campus food, computer, conference, financial, health, printing and duplication services. It has a Child and Family Centre, Institutional Research, Spiritual Needs and Media Centre. The university also has the largest student organization, with around 5,100 student members to date. It is led by a board of directors that represent each of the academic departments, representative groups, residences, university senators, and the executive. The organization caters to both French and English speakers, although recent trends indicate that English is more commonly used by many students.

Recreation time for students are often spent at the Student Centre. Located between the R.D. Parker Building and the Great Hall, it has many recreational and relaxing services, such as meeting rooms, typing and word-processing centres, study lounges, games room, Entre-Deux lounge, travel agencies, off-campus housing, sitting houses, and Women's Center.

It is the largest city in Northern Ontario in population, and the 24th largest metropolitan area in Canada. In land area, it is now the largest city in Ontario and the seventh largest municipality in Canada. Sudbury has lent its mining heritage to two major tourist attractions: Science North, an interactive science museum built atop an ancient earthquake fault on the shore of Lake Ramsey, and Dynamic Earth, an earth sciences exhibition which is also home to the Big Nickel, one of Sudbury's most famous landmarks.

Sudbury was one of the first Canadian cities to plan and implement its own digital telecommunications strategy. Beginning in 1996, the city began constructing a fibre optic network which saw over 400 kilometres of cable laid down to serve the city's business and citizen populations. In November 2005, the city was named one of the world's "Smart 21 Communities" by the Intelligent Community Forum, a worldwide project to honour technological innovation.