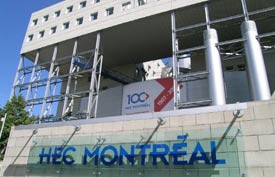 HEC Montreal (École des Hautes Études Commerciales) was established by the Chambre de Commerce De Montreal, under the support of Saint-Jean Baptiste Society. It is an associate of the Universite de Montreal, which is the oldest school for management in Canada. It has recently marked its 100th anniversary in 2007. ... continued below

Its main building has won an award for “institutional architecture,” and is located on Côte-Sainte-Catherine, near the Université-de-Montréal Metro Station. It currently has an estimated 15,000 students, with 4,000 international students, 60,000 graduates, and 300 professors. The campus also boasts of the Standard Life Room, which allows professors to give team projects and interact with the group in real-time. There are also multimedia control consoles, smartboards, photosensors, multiple monitors, and Wi-Fi-enabled environments available in the campus.

The Student Service Office supports the students who need valuable information on Academics, Financial Aid, Career Counselling, and Housing Accommodations. It also has an International Student Affairs program that assists all foreign students in all matters, be it immigration, housing assistance, exchange programs, Quebec lifestyle, and many others.

HEC Montreal aims to enrich a student’s life through the various clubs and events it organizes. It encourages students to compete in their fields of studies and join diverse groups to encourage them to set higher goals and promote a sense of belonging and camaraderie among each other.

HEC was listed by Forbes’ 2007 under the category "1-year non-US Business Schools." In 2009, the AméricaEconomía magazine ranked HEC Montreal 16th in the Global Ranking of the Top 50 Business Schools, which is the main reference of the Latin American business community. In 2009, it was also ranked 28th in North America by QS Top MBA.