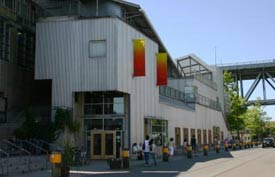 The Emily Carr University of Art and Design, which was formerly called Emily Carr Institute of Art and Design, is one of the oldest institutes in British Columbia that focuses on educational Arts, Media and Design. The university is named after the “Canadian Icon”, Emily Carr, a writer and artist whose main inspiration was the indigenous peoples of the Pacific Northwest Coast. The university began to operate under its new name on September 2008, and over the last 84 years, has been a strong influence in the Canadian Arts scene. ... continued below

The main campus of the University is situated on Granville Island in Vancouver, which includes the South building and the North building. Recently, the University has expanded its campus on West 3rd Ave and the Great Northern Way Campus, adding in more studio facilities. The campus has e-mail and web access, computer workstations at the library, digital editing, online registration, and digital prototyping equipment. The campus is introducing “smart classrooms”, and has recently launched a research facility, the Intersections Digital Studios where the faculty and its students can obtain interactive entertainment, motion capture studio (research animation), thermal printers, Apple Xserve for high-speed rendering, flatbed scanners and full-body scanners for 3D and 2D work, Bailey kiln for ceramics prototyping, digital HD video cameras, and interactive and ergonomics entertainment. The campus does not offer in-campus residences, although there numerous off-campus housing options that can help the students find accommodation.

The Students’ Union serves as an advocate to protect the students’ rights and interests, and students can volunteer to lobby and campaign for the union. The union also publishes a newspaper and distributes 5000 copies throughout the city of Vancouver. Students can share their works and submit their artwork or writing anytime.