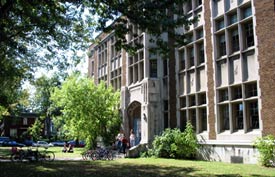 Concordia University is one of Montreal, Canada’s two Anglophone universities. Taken from the motto of Montreal city, Concordia salus means “well-being through harmony”, and the name was adopted by the college after the merging of Loyola College and Sir George Williams University. The University’s legal date of establishment was on August 1974 and started with the five Faculties: Sir George Williams Faculty of Arts, SGW Faculty of Science, Faculty of Commerce (now the John Molson School of Business), Loyola Faculty of Arts and Science, Faculty of Engineering (now the Faculty of Engineering and Computer Science). ... continued below

Concordia University has two campuses, Loyola Campus (Notre-Dame-de-Grace), and Sir George William Campus (Quartier Concordia). The two campuses are joined by a shuttle bus service that is free for the university’s faculty, staff, and students. Recent expansions made to the campus include: the Richard J. Renaud Science Complex (Loyola) in August 2003, the Engineering, Computer Science and Visual Arts Integrated Complex (Sir George Williams campus) in September 2005, and the John Molson School of Business building which opened on September 2009. On October 2009, the Hall Building and the McConnell Library buildings will be connected by the 120-metre underground tunnel of the Guy-Concordia metro station. The campus offers co-educational residences to students who want to live near the campus. They include: Residences on the Loyola Campus (Hingston Hall and Jesuit Residence) and on the Sir George Williams Campus (Grey Nuns Residence).

Concordia University is one of the “G15” in the Engineering schools in Canada. The Ecole de Mines de Paris ranks it number one among Canadian universities, and 33rd among the world universities with regards to university graduates who occupy the “Chief Executive Officer” position at the Fortune 500 Companies. In 2008, Concordia ranked 20th in Canada, and 357th internationally in the Times Higher Education Supplement World University Rankings. Its school of Business (John Molson) is consistently on the top ten Canadian Business Schools within the top 100 worldwide.