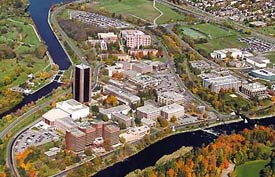 Carleton University was established in 1942 as a small college in Ottawa, Ontario during the height of the Second World War. It was named after Guy Carleton, the first Baron Dorchester and the Governor-General of British North America. Over the years, the college has been gaining a reputation for its highly specialized and demanding programs. Its motto is: “Ours the Task Eternal”. ... continued below

The University has the Educational Development Centre, which provides the teaching tools and resources to the assistants, faculty and instructors of Carleton. Together with the Queen’s University, College of Canada, University of Ottawa, and the Royal Military College of Canada, Carleton has access to the High Performance Computing Consortium (HPCVL), a supercomputer power which helps solve more complex and complicated problems. Its library, the Maxwell MacOdrum Library, houses more than three million books, government documents, journals, music scores, microforms, archives, maps, newspapers, and rare materials. Its Audio Visual Resource Centre has a large collection of films, and its European and Russian Studies Centre has a big collection of Eurasian-focused materials.

The University has ten Residences available to students who want to live in the campus: Frontenac, Grenville, Leeds, Prescott, Renfrew, Glengarry, Russell, Dundas, Stormont, and Lanark. All of them are interconnected to the tunnel system of the campus. This tunnel, an elaborate 5 km of underground tunnels, have murals created by student groups. The tunnels can be accessed by anyone, including those with disabilities. Most of the residents are nicknamed “Tunnel Rats”, “McKeowns”, or “Tunnel Moles”.

Carleton is known for its rare programs in Journalism, Aerospace Engineering, Commerce, Interactive Multimedia and Design, Geomatics, European and Russian Studies, International Affairs, Public Policy, Network Technology, Renewable Energy, and Film Studies. It offers around 60 programs under these faculties: The Sprott School of Business, Faculty of Science, Faculty of Public Affairs, Faculty of Graduate Studies and Research, Faculty of Engineering and Design, and the Faculty of Arts and Social Sciences.

There is no federal capital district in Canada. Ottawa is a municipality within the Province of Ontario. Although it does not constitute a separate administrative district, Ottawa is part of the federally-designated National Capital Region, which includes the neighbouring Quebec municipality of Gatineau.