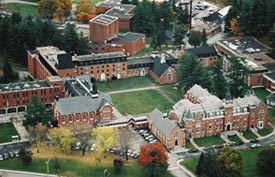 Bishop’s University, once named Bishop’s College, was founded by Bishop George Jehoshaphat Mountain in 1843 for the education of the Church of England members. It became a University in 1853. It has a notable academic past, and is known today as a small liberal arts university that primarily teaches undergraduate students. Its motto is Recti cultus pectora robarant, which means “Sound learning strengthens the spirit”. ... continued below

Bishop’s campus is home to the junction of Massawipi and St. Francis Rivers, which makes the scenery a part of the architectural landscape of the campus. Popularly named “Oxford on the Massawippi”, the campus is known for its beautiful architecture, which has Gothic influences. Construction on campus has been ongoing, and its most recent building is the Paterson Hall which was built in 2003. Its library contains around 600,000 items, which include more that 20,000 online and printed periodicals and atlases/maps. Its special collections are inside the John Bassett Memorial Library.

The University has around 130 full-time faculty members with a 16:1 student faculty ratio. Students who want to live inside the campus can choose from 7 residence halls which have immediate access to the library, academic buildings, athletic complex, recreational facilities and other support services. These halls include Paterson, Munster, Kuehner, Abbott, Mackinnon, Pollack, and Norton.

Bishop’s University Students’ Representative Council is an independent organization that represents the full-time students of the campus, including most committees in the Academic Senate and the University Board of Governors. Through the Social Department, the council helps fund the academic and non-academic clubs. It also produces many publications, such as the Mitre Literary Journal and the Quad Yearbook and organizes various events on the campus (Orientation Week, Frosh Week and Graduation Formal). The Board of Directors of the Council is composed of the President, VP Academic,VP Student Affairs, VP Social, Director of Finance, and General Manager. There are also four Student Affairs Representatives, four Student Event Coordinators, five Student Senators, and one Corporation Representative.

There are three categories that offer different levels of athletic competition of students. They are: Inter-university Athletics, Intramural Sports, and Recreational Instructional Program. Inter-university Athletics is a part of the Canadian Inter-university Sport and the “Federation Quebecoise du Sport Etudiant”. They compete in Men’s and Women’s Rugby, Women’s Basketball, Football, and Men’s and Women’s Golf. The Intramural Sports is another competitive level in co-educational and individual sports, such as volleyball, tennis, squash, softball, soccer, water-polo, ice hockey, golf, touch football, broomball, basketball, ball hockey, and badminton. Recreational Instructional Program offers various life-enhancing and non-competitive activities, such as yoga, martial arts, and aerobics. The John Price Sports and Recreation Centre has a double gymnasium suitable for volleyball, basketball, and volleyball. It can seat around 1,200 people. It also has a six-lane, 25-metre swimming pool with one metre diving board, outdoor tennis, squash courts, combative aerobics, facilities for gymnastics, weight training, and indoor jogging. There is also a cafeteria lounge that leads to the outdoor patio. Other sports facilities include the Coulter Field Stadium, the W.B. Scott Memorial Rink, ten outdoor tennis courts and a 9-hole golf course.

The University offers primarily undergraduate courses. It also offers graduate courses, M.Ed., and M.A. degrees in Education, M.Sc in Physics and Computer Science. There are several programs from five academic divisions: William's School of Business, School of Education, Division of Social Sciences, Division of Natural Sciences and Mathematics, and Division of Humanities. Each division strives to give the students a well-balanced academic experience as a whole.

Lennoxville, population 4,963, is a borough of the City of Sherbrooke, Quebec, Canada. It was originally a town, but was amalgamated into the larger city of Sherbrooke in 2002. Located on the Massawippi, Saint-François River and Ascot Rivers, Lennoxville is a primarily English-speaking community, located in the heart of the Eastern Townships. The community has long been known as the centre of English language education in the area, though it is considered to be one of the most bilingual communities in Quebec (with anglophones comprising 66% of the population and francophones representing 34%) and is widely regarded as an all-season resort area. Downtown Sherbrooke is 5 kilometres away.