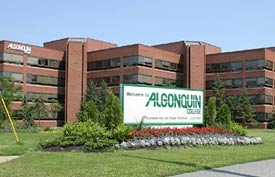 The Algonquin College was founded in 1967 during the creation of Ontario’s college system. It is an English-language college that focuses on applied Arts and Technology in the Ontario region. Its name was derived from the First Nations Peoples who were the original settlers of the place, and its motto is: Your goals, your career, your college. ... continued below

About Algonquin College of Applied Arts and Technology

Algonquin has satellite campuses which include Perth and Pembroke. The main campus is in Ottawa, Ontario, Canada. There are around 20,000 students in more than 140 programs, and its Woodroffe’s campus offers two functional television studios with connecting control rooms. The campus has a fully functional broadcast radio stations that is run by the Broadcasting students.

In 2009, Algonquin’s Constructing Our Future Campaign has gotten a $100,000 donation from the Modern Niagara Ottawa Inc. The campaign set out to raise $7 million for the $79 million project, “Algonquin Centre for Construction Excellence,” which is expected for completion in 2011. The centre will “add 600 new spaces for construction trades training and become home to a total of 2,500 cross-disciplined full-time students and 5,000 part-time registrants as it brings together all of the College’s trades, design and building sciences programs and research into one creative cluster.”

Ottawa is the capital of Canada and the country's fourth largest municipality. Ottawa is situated on the south bank of the Ottawa River, and contains the mouths of the Rideau River and Rideau Canal. The oldest part of the city is known as Lower Town and occupies an area between the canal and the rivers.

Ottawa is home to a wealth of national museums, official residences, government buildings, memorials and heritage structures. The abundance of well-maintained parks (over 800), woodlands and recreational paths stand as a testament to the City's commitment to the environment and connects urban, suburban and rural residents to its vast green space.

Ottawa's focus on healthy living is also represented in a rich array of recreational facilities and programs like summer camps, tennis, public skating and swimming. Ottawa's primary employers are the Canadian federal government and the hi-tech industry. Because major companies have offices in the city, it has become known as "Silicon Valley North."