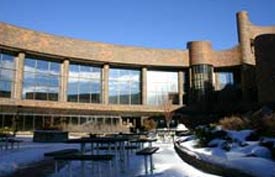 Grand Prairie Regional College (GPRC) is a public, board-governed college that operates as a “comprehensive community institution” under the Post Secondary Learning Act of Alberta. It was established in 1965 as an answer to River County’s request for a post-secondary institution in its county. Its first full-time initial students totaled a mere 69. Today, there are around 2,000 + full and part-time students enrolled in credit programs. Its vision is to be “recognized by its learning communities for leadership in educational excellence,” and its mission is to “connections to knowledge, experience and community one life at a ... ... continued below

Students who plan to live in the campus can go to the Fairview College Campus Residence. It has 513 residence beds in 135 self-contained furnished apartments. There are accommodations for students with families and single students. The residence is in the eastern part of the main campus near Bear Creak. Its fully-furnished apartments can be divided into four types: sixty-two 4-person units, eleven bachelor units, two wheelchair accessible units, sixteen 5-person units, and eight family housing units. Amenities include: oven and refrigerator, tables, chairs, couches, love seats, closets, dressers, beds, study desks or work stations.

The Varsity Team of GPRC is known as “GPRC” Wolves. They belong in the Alberta Colleges Athletic Conference (ACAC), and they compete in the following sports: volleyball, swimming, soccer, cross-country running, curling, basketball, and badminton. The most well-known team is the Wolves Men’s Volleyball Team, which has a tradition of winning in the ACAC.

Students who plan to live outside the campus can take advantage of GPRC housing services. They include: Off-Campus Housing lists, Apartment Directory, Newspaper Classifieds, and Accomodation Wanted Ads.

Grande Prairie is the main city in the northwestern part of the province of Alberta in Western Canada. It is located on the southern edge of the Peace River Country. The city of Grande Prairie is one of Canada's fastest growing cities.

Major industries include oil and gas, agriculture, forestry, services, and technology. Grande Prairie is one of the most economically diverse cities in Alberta outside Edmonton and Calgary. Due to the fact that Alberta has no provincial sales tax and that Grande Prairie is fairly close to the Alberta-BC border, there is a high number of shoppers from British Columbia. Hence, it is not unusual to see a large number of vehicles with BC license plates in retail and mall parking lots in Grande Prairie.

Grande Prairie has a northern continental climate typical of Alberta and northeastern BC. Winters are generally cold with some mild spells. Summers are often fairly cool to pleasantly warm in the daytime, but nights can be cool despite the long summer days typical for its latitude. Hot days over 30°C are rare, occurring on average only one to two days a year, which is not unexpected this far north. Winter conditions can vary tremendously from year to year.