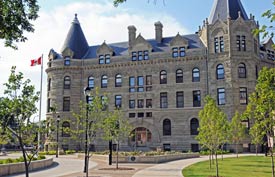 The University of Winnipeg

About The University of Winnipeg

The university has made a lot of renovations for the past years, including constructing student cafes, theatre, and a recreation complex. An ambitious community redevelopment plan (Campus Development Plan) was started by the UWinnipeg's Community Renewal Corporation, and their aim is to develop a holistic approach to campus and community development. Some of the things to look forward to are: McFeetors Hall: Great-West Life Student Residence, Former United Army Surplus Site, Greyhound Bus Depot, Richardson College for the Environment and Science Complex, New Day Care Center, Spence Street Bus Loop, Duckworth Centre Expansion / Soma Cafe, The Canwest Centre for Theatre and Film, Portage Commons - Front Lawn, and Wesley Hall.

The University offers students various services to support their academic life. They are available to them from the very first day they arrive at the university until they graduate. Some of the services include: Academic Advising, which helps students plan their study programs; Aboriginal Student Services Centre, mentorship and tutoring of students with different cultural backgrounds; Adult Learner Services, Centre for Distributed / Distance Learning, offers telecourses and online courses to make studying more convenient for the student; Disability Services and Resource Centre, aids disabled students to access equipment and software to adapt to their needs; Free Tutoring, which helps students improve their writing skills; International Student Services, offers services to students who come from outside of Canada; The University of Winnipeg Bookstore, the one-stop shop for all textbook and school supplies; Student Health Plan, administers health plans to ensure that students have dental, vision, travel, and prescription drug coverage.

The university is represented by its varsity team, Winnipeg Wesman (baseball, football) and Manitoba Moose (hockey). Students who are more into music can go to: The MTS Centre, The Burton Cummings Theatre, The Winnipeg Symphony Orchestra, West End Cultural Centre, The Pyramid Cabaret, and Exchange Event Centre. The downtown area is where arts and culture is at its best, and everyone can choose from among these landmarks: The Winnipeg Art Gallery, The Royal Winnipeg Ballet, The Manitoba Theatre Centre, Manitoba Museum, Pantages Playhouse Theatre, The Winnipeg Fringe Festival, The Winnipeg Jazz Festival. Students with hungry appetites can go to The Forks, Corydon Avenue, Portage Place, and The Exchange.

The university has six faculties: Faculty of Arts, Business and Economics, Education, Science, Theology, and Graduate Studies. Its colleges include: Global College, Menno Simons College, and Richardson College for the Environment. The university also has centres and institutes, such as the Centre for Academic Writing (CAW), Centre for Research in Young People's Texts and Cultures (CRYTC), Centre for Innovation in Teaching & Learning (CITL), Centre for Forest Interdisciplinary Research (C-FIR), Centre for Distributed / Distance Learning (CDDL), Centre for Rupert's Land Studies, Centre for Sustainable Transportation, Institute for Women's and Gender Studies, and the Institute of Urban Studies.

Winnipeg is the largest city and capital of the Canadian province of Manitoba. Winnipeg is located at the eastern edge of the prairie region of Western Canada, and, due to this, plays a prominent role in transportation, finance, manufacturing, agriculture and education. Winnipeg also lies in close proximity to hundreds of lakes, including Lake Winnipeg, Canada's fifth largest lake and the world's eleventh largest.

Winnipeg is the sunshine capital of Canada, with over 2300 hours of sun annually. Winnipeg has the second clearest skies year-round and is the second sunniest city in Canada in the winter.

Winnipeg is well known across the prairies for its arts and culture. The isolation of the city led to the development of many homegrown cultural institutions in theatre, music and dance. As the city developed, it became one of the main stops in Canada for artists as they travelled across Canada. It remains one of the top destinations today.