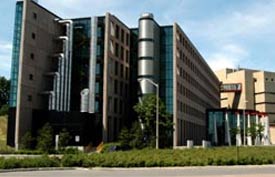 The University of Ottawa

The University of Ottawa has been offering French and English speaking students quality education since 1848. This bilingual university is located in Canada's capital, and more than 36,000 students from all over the world congregate here to learn and share ideas with each other. Often dubbed, "Canada's University," this institution offers courses and programs using the two official languages of Canada -- French and English. ... continued below

About The University of Ottawa

Located in Ontario, Canada, the university is situated near many public service institutions, such as Canada's government departments and agencies, non-profit organizations, parliament, health centres, research institutions, and major libraries. On-campus residences are available to 3,000 full-time students. They can choose among two-apartment-style, one suite-style, adjacent neigborhood houses, or four conventional residences. Each of these residences is furnished, and they are also equipped with internet connections and cables. Most freshmen who enter in September are privileged to have a reserved spot on the list of residents, although they have to make sure that they meet the deadline for the requirements.

The university offers personal support services, such as university and faculty based counselling, women's resource centres, mentoring programs and spiritual resource centres. Its academic services include career services, mentorship programs, learning services and an international agency. Students have the option of choosing from among 100 student associations and clubs in the University. Those who are into sports activities can take advantage of the two complexes offered by the university. The facilities that it offers are martial arts room, squash and racquetball courts, three gymnasiums, 50-metre pool with a diving tower, fitness centre, multi-sports field, dance studio, multi-purpose sports room, and a sports medicine and rehabilitation centre.

University of Ottawa comprises ten faculties. They are divided into Education, Graduate And Postdoctoral Studies, Health Sciences, Management, Arts, Engineering, Medicine, Law, Science And Social Sciences. The school offers around 300 programs and approximately 5000 courses for undergraduate students, with the added option of joining in 60 cooperatives that allow these students to study while at the same time gain work experience that will train them for their future profession.

The student population in the University of Ottawa consists of an estimated 30% French-speaking students and 70% English-speakers. Students who study here are offered French immersion study programs with the option of obtaining French as Second Language Certification. Students are also given the option of producing their work either in French or English regardless of the language used in their course, except those in the language programs.

The 2004 Financial Times placed the institution in the 65th place out of the 220 Executive MBA's being offered by Canada's universities. It also scored the distinction of being called the "Best in Canada" in three categories, namely: "International Component Of Its Curriculum (Ranked Among The Top 10 In The World)," "Career Progress Achieved By Graduates," and "Career Progress Achieved By Graduates." The university is ranked ninth in total-research funding in the country and fifth in focused research. It is also a member of the Group of Thirteen, an association that lists the most research-concentrated universities in Canada.

Students who wish to live outside the campus can also rent rooms. The minimum monthly rent for a private home costs approximately $400, two-bedroom apartments, around $800; one-bedroom apartment, $625, and bachelor pads, estimated to be around $550.

Some of the most famous alumni of this university include: Alex Trebek, previous broadcaster for CBC and the host of the game show Jeopardy!; Michel Bastarache, Justice of the Supreme Court of Canada; Louise Arbour, UN's High Commissioner for Human Rights and former Supreme Court Justice; Michel Marc Bouchard, playwright; Paul Desmarais, Canadian billionaire and entrepreneur, and Jeanette Jenkins, Hollywood fitness trainer.

Ottawa is the capital of Canada and the country's fourth largest municipality. Ottawa is situated on the south bank of the Ottawa River, and contains the mouths of the Rideau River and Rideau Canal. The oldest part of the city is known as Lower Town and occupies an area between the canal and the rivers.

Ottawa is home to a wealth of national museums, official residences, government buildings, memorials and heritage structures. The abundance of well-maintained parks (over 800), woodlands and recreational paths stand as a testament to the City's commitment to the environment and connects urban, suburban and rural residents to its vast green space.

Ottawa's focus on healthy living is also represented in a rich array of recreational facilities and programs like summer camps, tennis, public skating and swimming. Ottawa's primary employers are the Canadian federal government and the hi-tech industry. Because major companies have offices in the city, it has become known as "Silicon Valley North."