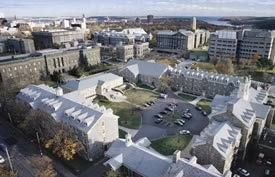 The University of King's College - Halifax

The University of King's College, the oldest grant university started in 1789 in Nova Scotia. It was patterned after the traditional English universities of Anglican, didactic and religious background. The group who established it was headed by Bishop Charles Inglis, the first bishop of Nova Scotia. ... continued below

About The University of King's College - Halifax

The University of King's College only offers undergraduate programs to its students. It relies on Dalhousie University for some of its programs, as it is also near the Dalhousie Campus. Students who plan to live within the institute can live in the Residence, a community that not only finds convenience in living near the campus, but also helps students to improve their academic experience. This is true especially for new and incoming freshmen students who are enrolled in the Foundation Year Programme.

The King's Students' Union is a hub information that aims to help give valuable knowledge to its students. Its services may range from providing valuable information about the Ward Room or the new Health and Dental Plan, or even schedules for sport and party events for the week. It also provides Orientation Weeks, Advocacy, Campus Map, Campus Safety, Women's Centre, Travel Cuts, International Student Identification Cards, Societies, Archives, Handbooks, and many more.