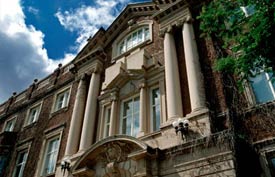 The University of Alberta

The University of Alberta was founded in 1908 by Alexander Cameron Rutherford and Henry Marshall Tory. It is a non-denominational university that aims to "Discover, disseminate, and apply new knowledge through teaching and learning, research and creative activity, community involvement, and partnerships." It is recognized as one of the most best universities in Canada today. ... continued below
Scholarships for The University of Alberta
Phyllis Weston English Scholarship

About The University of Alberta

The university is one of the largest in Canada. Its main campus is located in downtown Edmonton. The campuses that are located here are: North Campus, South Campus & Michener Park, Augustana Campus, Campus Saint-Jean, Enterprise Square, and Calgary Centre. Several construction projects are on the the way, such as the expansion of the University of Alberta Hospital, the construction of the
Edmonton Clinic, the Centennial Centre for Interdisciplinary Science, the Department of Physics, and the completion of additional campuses and health research innovation facilities in the near future. Also, its university library system is one of the biggest research libraries in Canada, thanks to the valuable addition of the Rutherford Library. Students who plan to reside inside the campus can take advantage of the university's Residence Services, including Augustana Faculty Residences, Michener Park, Lister Centre, HUB International, East Campus Village, St. Joseph's College Residence, International House, Newton Place, and La Residence Saint-Jean.

The Alberta Golden Bears (Men's) and Alberta Panda's (Women's) are the representatives of the campus in the Canadian Interuniversity Sport competitions. The Alberta Pandas are one of the major shakers in hockey, and they have won 7 times in the 8 year competition of the Canada West Conference.

The University of Alberta is considered to be one of the major players in research. In 2008, the Shanghai Jiao Tong University ranked it 106th in the world and 62nd in North America. Newsweek's 2006 Top 100 Global University ranked it 55th in the world and 35th in North America. In a 2008 survey by Maclean's, it places the University of Alberta 5th in the category of Medical-Doctoral program. The Webometrics 2008 Ranking of World Universities and the Times Higher Education Supplement rates the university 4th in the Top Five Canadian Universities, 5th within the Best 5 Canadian and 50 Global Universities for Technology, and fourth in the category of Natural Sciences. In addition, the university was named "Canada's Top 100 Employers" by Mediacorp Canada Inc in 2008. It was also announced by the Edmonton Journal and Calgary Herald as one of Alberta's Top Employers in 2008.

Edmonton is the capital of the province of Alberta. The City of Edmonton covers an area larger than Chicago, Philadelphia, Toronto or Montreal. Edmonton has one of the lowest population densities in North America. In addition, Edmonton's river valley is 22 times larger than New York City's Central Park. The public river valley parks provide a unique urban escape area with park styles ranging from fully serviced urban parks to campsite-like facilities with few amenities.

Edmonton has a northern continental climate with extreme seasonal temperatures, although the city has milder winters than either Regina or Winnipeg, which are both located at a more southerly latitude. It has mild summers and chilly winters, with the average daily temperatures ranging from -11.7°C in January to 21°C in July.