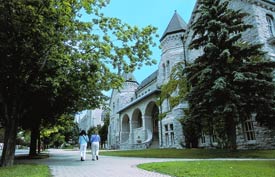 The Queen’s University, or Queen’s, was first founded as Queen’s College at Kingston, Ontario through a royal charter from Queen Victoria. Formerly affiliated with the Church of Scotland, Queen’s College was initially established to instruct the youth in the fields of science and literature. Today, Queen’s University is a non-sectarian, public university that consists of eighteen faculties and schools. ... continued below

Students who plan to live near the campus can take advantage of the sixteen residence buildings that can accommodate many students. Each of these residences include internet connections and telephone connections, and there are a variety of dining halls and food locations that cater to all kinds of students and their dietary preferences.

Queen's University offers resources and opportunities to help students adjust and thrive in the campus. These services are holistic, and they focus on the student's life in the university, their well-being, culture, spirituality, leadership skills, student-community relations, and living accommodations. Students can find many ways to be active in the campus. From volunteering for the Queen's Feminist Review, doing television productions, competing at an Urban Snowboarding Competition, or joining the Amnesty International, they can take advantage of the 170 clubs that the university offers. For those who are more into sports, students can participate in the 30 men's and women's co-ed sports leagues or the annual intramural sports weekend. Students who are into fitness can join some of the 40 fitness classes (yoga, pilates, salsa dancing, scuba diving, swimming) that the campus offers every week.

Today, Queen’s is held at a high esteem because of its history and achievements. This high regard is reflected on the high rankings received by the university. It placed 2nd in Maclean’s University Rankings in the medical-doctoral category. In the same year, Times Higher Education Supplement (THES) ranked Queen’s 7th in Canada and 117th amongst other international universities. Its MBA program was placed on top of BusinessWeek Magazine’s list of MBA programs from 2006 to 2008. Among its other achievements include high student retention and a 95% graduation rate—the highest among Canadian institutions.

Music and theatre is alive and well in the limestone city, thanks to Kingston's Grand Theatre (Kingston), Domino Theatre, Theatre Kingston and The Wellington Street Theatre, and other small groups that dot the downtown area. The Kingston Symphony Orchestra performs at The Grand Theatre, as do several amateur and semi-professional theatre groups.

Kingston's economy relies heavily on public sector institutions and establishments. The most important sectors are related to health care, education, government, tourism and culture, manufacturing, and research and development.