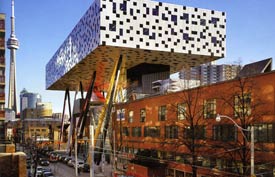 Ontario College of Art and Design

Often dubbed as Canada's "University of the Imagination," the Ontario College of Art and Design was founded in 1876 by the Ontario Society of Artists. The school was originally known as the Ontario School of Art. The school settled with its present name in 1996.
... continued below

About Ontario College of Art and Design

The university offers personal support services to its students, such as student unions, centre for students with disabilities, counselling, health and safety training, jobs on campus, and many different student associations. They also offer academic services, which include aboriginal student programs, IT support, career advising, technology and media services, and writing and learning centres. Incoming students are also provided a week-long summer orientation that helps them make a much smoother transition from secondary school to a university.

Many students in the university take advantage of student memberships that give them access to many fitness and recreational centres that are near the campus. OCAD is also a bicycle-friendly institution, with bike racks on both sides of the main entrance and at the city posts on both sides of its streets. There are also gyms that are easily accessible for the students. For those who are more of thrill-seekers, they can visit the park and have fun camping, cycling, and hiking. There are a lot more activities offered, and everyone can find something that will suit their interest and level of adventure.

Typical courses offered by Ontario College are subdivided into four areas: Faculty of Art, Faculty of Design, Faculty of Liberal Studies and Alternative Programs. The two most common divisions are the Faculty of Art, where students can have the option of getting several majors to enroll in, such as: Integrated Media, Photography,Criticism & Curatorial Practice, Printmaking, and Sculpture/Installation, and Drawing & Painting, and the second one is Faculty of Design. Here, students can choose between Environmental Design, Graphic Design, Material Art & Design, Advertising, Industrial Design, and Illustration.

The school uses a learning environment that joins together an artistic, studio-based education with a scientific and critical analysis of their “genre.” This combination has led to remarkable and unexpected results, encouraging students to be more diverse and experimental with their work. Many inventions were the result of this, and some of the best innovations regarding design were a product of this institute.