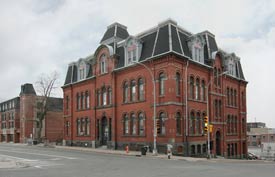 The Nova Scotia College of Art and Design University (NSCAD) was established in 1887 by Anna Leonowens (Anna and the King of Siam). Its original name was Victoria School of Art and Design. Today, it is an art school that emphasizes political art and artistic innovation, and many of the most interesting and successful artists have graduated from this school. ... continued below

About Nova Scotia College of Art and Design

NSCAD has specialized facilities which include electrical, water, grounds, and waste distribution systems. It maintains and operates its building structures, and manages it recycling, waste removal, transportation, pest control, and custodial services. It also has fire protection, security, emergency preparedness, and other project delivery services for the renovation of existing buildings to the construction of new facilities.

The campus does not maintain in-house residences, so students are encouraged to make their own arrangements with the Dalhousie University or with any other residence within the vicinity of the Halifax/Dartmouth area. Some of the common types of accommodation provided in these areas include: Furnished Rooms (Single Rooms, Double Rooms), Furnished and Unfurnished Apartments (1 Bedroom, 2 Bedrooms), and Furnished or Unfurnished Houses.

The University offers some of these services to its students: Technical Support, Student Housing, Registration & Academic matters, Lockers, Letters of Permission, Job Bank, ID Cards, Health Insurance, Financial Aid & Scholarships, Enrollment Verification Letters, Counselling, Academic Skills Workshops, Academic Appeals, and Academic Advising. All NSCAD students who are registered for non-credit and credit courses, workshops, and sessions are given Health and Safety information which includes training and personal protective clothing or equipment and safety instruction. For protection, students are asked to sign in with the Security personnel after normal work hours.

All full-time and part-time, graduate and undergraduate students are automatically members of the Local 7 of the Canadian Federation of Students and the Student Union of the Nova Scotia College of Art and Design (SUNSCAD). The SUNSCAD is the representative of the student’s needs on many issues related to the committees of the university. Students are also given some benefits, including a student transit pass (U-PASS) that allows them an unlimited use the Metro Transit Buses, Access-A-Bus, and Ferry.