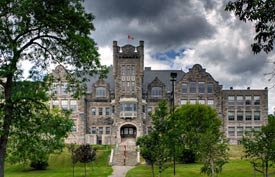 Lakehead University began in 1946 as Lakehead Technical Institute. Today, it has evolved into a non-denominational education, arts, and science institution. ... continued below

Lakehead provides opportunities for students to perform hands-on research, and its state-of-the art facilities, like their Paleo DNA Laboratory, Advanced Technology & Academic Centre, and the Robotics Lab are some of the things students can take advantage of during their stay in the university. Lakehead sits in Thunder Bay, Ontario, and students who plan to study and live near the campus will have a lot of options to choose from. High school students who are admitted in the university will automatically get a residence room offer as part of their admission package. The rest of the bed spaces will be divided through lottery. There are three dormitory-styled, co-ed residences with available meal plans as part of its amenities. Townhouses and apartments are also available, and they provide single rooms in a four-bedroom unit.

The university offers many services to students. Some of them include: Academic Advising, Athletics and Recreation, Financial Aids and Awards, Chaplaincy, Emergency Response Team, Health and Counseling Centre, Learning Assistance Centre, Security Services, Student Placement and Co-Operative Education, Student Unions and Affairs. Lakehead is also home to many student clubs, from student councils to multi-culture organizations. Sports enthusiasts can play hockey or do some snowboarding and cross-country skiing during the winter months. During summer, they can go hiking, kayaking, and rock climbing with their friends.

Lakehead's official newspaper is The Argus, and its campus radio and station, which also broadcasts on the internet, is CILU-FM. Their most famous campus hangouts and performance venues are The Outpost and The Study Coffeehouse.

There are nine faculties in the university, namely: Science and Environmental Studies, Business Administration, Faculty of Health and Behavioral Sciences, Education, Engineering, Social Sciences, Humanities, Forestry and the Forest Environment, Graduate Studies, and Medicine. There are also an estimated 100 concurrent programs that the Faculty of Education offers to interested students.

According to Canada's Premiere Collegiate Business Competition, Lakehead University is one of the best performing universities in Canada. It also ranked third place in the Inter-Collegiate Business Competition. It was also awarded “Canada’s Value-Added University,” garnering the biggest number of students who graduate on time and are employed in jobs after graduation.

Lakehead is unique in the sense that it performs a dual role in the society. Its first role is to provide a wide range of academic studies for all kinds of students. However, it also has the role of an information gatherer. It seeks out information about the world, the nation, and other provinces so they can find valuable information that can help improve the society, economy, and culture. Its numerous contributions have paved way for many awards, including the "Research University of the Year" by Research Infosource. It also took the number one spot in the Undergraduate Category for research income growth and research intensity.

Thunder Bay is the most populous municipality in Northwestern Ontario, and the second most populous in Northern Ontario after Greater Sudbury. The census metropolitan area of Thunder Bay has a population of over 125,000. The average daily temperatures range from a high of 17.6°C in July and a low of -14.8°C in January.

Thunder Bay's main tourist attraction is Fort William Historical Park, a reconstruction of the North West Company's Fort William fur trade post as it was in 1815. The marina in downtown Port Arthur, an area known as The Heart of the Harbour, draws visitors for its panoramic view of the Sleeping Giant and the presence of various water craft. The marina also includes a lake walk, playground, harbour cruises, a children's museum, and a Chinese/Canadian restaurant. There are several small surface amethyst mines in the area, some of which allow visitors to search for their own crystals.