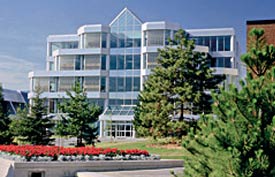 Humber College Institute of Technology & Advanced Learning, or Humber College, is a polytechnic university that was founded during the establishment of Ontario's college structure in 1967. ... continued below

Humber is located at the West Humber-Clairville neighborhood in Toronto, and it has an estimated 55,000 part-time students and 13,000 full-time students. An estimated 1,200 of them reside inside the campus. There are two campuses that accommodate students, Humber North Campus and Lakeshore Campus. Humber North is located in Humber Arboretum which includes three connected residence buildings for 1,000 students. Here, you will find a lot of amenities, which include Athletic facilities, Pubs, Bookstore, Computer Facilities, Food Services and Malls (Woodbine Mall). It has two buildings with Single Room Style accommodations, with a building that also has Suite style rooms to add more options to students. Lakeshore Campus, which is just west of Toronto, has a lakefront parkland and a conservative building scenario. It has technologically sophisticated classrooms, computer labs, athletic facilities, and food service. Its living accommodation has suite style rooms for 430 students.

Among the courses and programs that are included in Humber are regular courses and continuing education programs by the School of Creative & Performing Arts, Humber’s Business School, School of Media Studies and Information Technology, the School of Social and Community Services, and Liberal Arts and Sciences. It also has an English Program that attracts students all over the world.