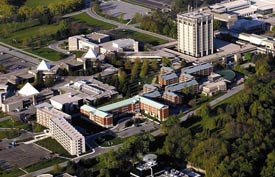 The Brock University, or Brock, was established in 1964, and was named after Major-General Sir Isaac Brock, the commander of the British and Canadian forces during the War of 1812. His last words during the Battle of Queenston Heights was "Surgite!" or "Push on," which is also considered to be the motto of the university. ... continued below

Located at the heart of of Canada's Niagara Peninsula in St. Catharines, Ontario, Brock offers student housing in the campus. Students can live in either townhouses or traditional style residences. Students who live in the traditional style houses or "halls" with other students are all required to get meal plans, while townhouse residents share their space with two to four students. However, meal plans are optional in this kind of setup. Both styles of residences have available single or double rooms, so more options are available to students. Students with special needs or disabilities can inquire with the Department of Residences and Services for Students with Disabilities for assistance.

Brock offers services such as the Aboriginal Student Aid, Campus Recreation, Career Services, Co-op Programs, Counselling Services, Harassment Prevention Services, Student Services (Health and Development) and Transportation. There are also many student organizations and clubs in the campus. The Brock University Students' Union is situated in the Alumni Students' Center. This is a melting pot of all the students of the university, which they also operate and run themselves. Another organization is the Brock Centre of Arts, which features two main theatres, The David S. Howes and The Sean O' Sullivan Theatres.

Brock is recognized as one of the leading academic research institutions in Canada. Research Inforsource has recently placed Brock third place among the best undergraduate research schools based on the output of their research publication and impact indicators. Brock is the only university in Canada that has the privilege of becoming a UNESCO Biosphere Reserve participant. Research has shown that graduates from this university have one of the highest rates of employments compared to all the universities in Ontario, with a high 96.5 percent outcome. There are around 63,000 graduates who are using their degrees not only in Canada, but also in other countries as well.

St. Catharines (2006 population 131,989; metropolitan population 390,317) is the largest city in the Niagara Region and the sixth largest urban area in Ontario, Canada, with 97.11 square kilometres of land. It lies 51 kilometres south of Toronto and is 19 kilometres inland from the international boundary with the United States of America. It is the northern entrance of the Welland Canal.