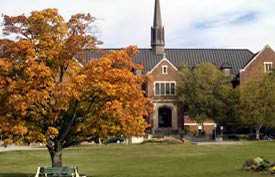 Algoma College was established in 1967, and it was initially limited to first year Bachelor of Arts studies and the Bachelor of Sciences programs. It only started offering three year programs in 1972. It was also affiliated with the Laurentian University, although it has become an independent university in 1995. ... continued below

Located in Sault Ste. Marie, Ontario, Canada, Algoma has had many significant changes in the past few years, and these include the $6 million expansion of the technology wing with state-of-the-art technology and computers, a student centre, bookstore, an estimated 250 seat lecture hall, a campus shop, and a pub named "The Speak Easy." It also expanded its student residence buildings, which guarantees students a lot of benefits, including saving $100 a month by living inside the campus, a 24-hour security staff with secure-access dormitories, a much easier-access to the Wishart Library, computer labs and faculty offices, a no-commute lifestyle, and a full access to the George Leach Centre.

Algoma offers a lot of assistance and resources to help students make the most of their stay in the university. Some of them include: Academic Advising, Walk Safe Program, Algoma University Union, Personal Involvements on Campus for all Students, The Algoma University Student Health Plan, and Counselling Services.

There are many opportunities for students to take part in the varied activities of the University. Among them are the student government for those who are interested in politics, The Algoma University Student Union (AUSU), for students who would like to attend weekly social events, special celebrations, and student advocacy programs. Students who are into sports and fitness can go to the George Leach Centre, where they can have full access to all the facilities and participate in a number of sports activities, such as squash, basketball, soccer, tennis, volleyball, badminton. They can also use all the weights and aerobic gadgets found in the centre, including the indoor jogging, aerobics, and walking area. For recreation, students who want to go out and have fun can go to the Speak Easy, a cafeteria, pub, and entertainment hangout for those who want to let their hair down from time to time. This place has a very good sound system. It also has good TV screens that make listening and watching an experience all in itself.

Presently, Algoma offers over thirty programs, and some of the most popular courses include: Computer Science, Psychology, English, History, Fine Arts, Sociology, Business, and Biology. They also have a joint program with the University of Abertay Dundee, where they offer students Master of Computer Games Technology Program. This gaming technology degree is highly respected and taught in real time on the campus from the University of Abertay Dundee, Scotland. This is the sole master's level course in gaming technology that exists in Canada today, and it primarily focuses on creating many portfolio software samples that can be shown to possible employers after graduating from the course.

Sault Ste. Marie is a city on the St. Marys River in Ontario, Canada. It is the third largest city in Northern Ontario. Sault Ste. Marie is bordered to the east by the Rankin Location and Garden River First Nation reserves, and to the west by Prince Township. To the north, the city is bordered by an unincorporated portion of the Algoma District, with Heyden as the nearest community. To the south, across the river, is the United States and the city of Sault Ste. Marie, Michigan.

The city has made a name for itself in steel-making, and Algoma Steel is the largest single employer with 3150 employees at the main plant and about 554 at the Tube Mill Tenaris, which is separate from Algoma Steel. During the 1940s, the steel and chromium operations were of substantial importance to the war effort in Canada and the United States. The Algoma Steel and the Chromium Mining and Smelting Corporation were key producers for transportation and military machines.

Sault Ste. Marie is home to the Bon Soo winter carnival, held every February. The city also hosts the annual Algoma Fall Festival which draws local and international performing artists. The Kiwanis Community Theatre and the landmark Central United Church are used for the performances. Both venues hold approximately 1,000 people.

The Art Gallery of Algoma features an extensive collection of local and international artist's work and presents regular exhibitions. The Musical Comedy Guild produces one, and sometimes two, amateur musical theatre productions throughout the year. The Guild is known for producing high-quality productions.