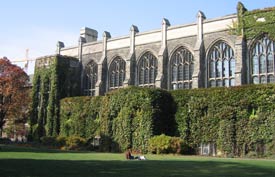 The campus has a Physical Plant where the Maintenance Department manages the buildings of the University and the Housekeeping Staff performs the requests of the students and the university staff. There are also Food Services, Catering and Event Services, Isabel Bader Theatre, Summer Accommodations (which provides affordable lodging for an estimated 800 tourists or travellers.), Weddings, and Parking (Rowell Jackman Hall at 85 Charles Street West).

There are varied student groups available in the campus, such as the Future Investors and Entrepreneurs (FINE), Film Societies, Victoria College Drama Society (VCDS), Vic Dance, The Renaissance Students Association (RSA), and the Victoria Off-Campus Association (VOCA). Victoria’s student’s newspaper is The Strand, and it publishes an annual journal called the “Acta Victoriana,” which contains literary creations of the University’s current students. The Victoria College Athletics Association is designed for student-athletes to join different sports.