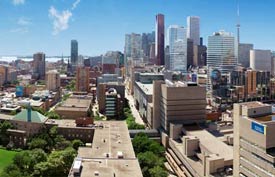 Ryerson University, which was founded in 1948, was named after Egerton Ryerson, the father of the Ontario Public School System and the owner of the first publishing company in Canada. He was also a leading educator, Methodist minister, and politician. Ryerson was once named “The Ryerson Institute of Technology”, but later changed to its present name in June 2001. Today, it is one of only two Ontario universities that has an Aerospace Engineering program. ... continued below
Scholarships for Ryerson University
Canadian Hotel Investment Conference Entrance Award
Ted Rogers School of Hospitality and Tourism Management Annual Fund Entrance Award

Ryerson has recently been expanding its campus, adding in six new buildings within the last few years and announcing two more pending constructions in the future. In 2008, it has expanded its efforts of expansion by purchasing a piece of $40 million real estate on Yonge Street. It has recently renovated the Ryerson Theatre, one of the biggest theatres in Toronto. The university allows its students to live inside the campus. It has around 840 beds in three of its campus residences: The International Living and Learning Centre (ILLC), O'Keefe House (OKH), and Pitman Hall (PIT).

The University offers its full-time and graduate students a membership at the Ryerson Student Union (RSU). Its objective is to improve the academic and personal life of all its students. Becoming a member of the union automatically makes a student a CFS member. CFS is home to 450,000 students from different colleges and universities across Canada, and it is an effective voice for all the students to bring about changes and reform in all areas of their academic experience. The campus also offers around 145 academic-related (Faculty of Arts, Faculty of Communication and Design, Faculty of Community Services, Faculty of Engineering, Architecture and Science, and Ted Rogers School of Management) and campus-wide Student Clubs (Sports and Recreation, Software and Games, Social Justice and Political Issues, Scholarly and Honour Societies, Music and Dance, Magazines and Bookclubs, Film, Theatre and Animation, Health and Wellness, Faith Based Clubs, and Culturally-Based Clubs).

Student-athletes and fitness buffs can find many options when choosing their sport or fitness program. They can choose to join in the Intramural Program, which is open to all students regardless of their level of sports skills; Recreation and Athletics Centre, home to various cardio machines, weight machines, free weights, two dance studios, two gymnasiums, three-lane indoor running track, four international squash courts, women’s and men’s locker rooms, saunas, and a 25-yard, six-lane pool.

Ryerson is well-known for its programs that focus on practice and theory. Some of its most notable graduate programs have made it the main choice for government and business professionals in the Greater Toronto Area.