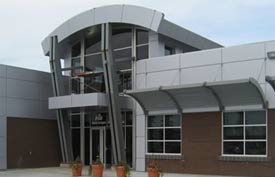 About Northern Alberta Institute of Technology

... in Canada, and mentors almost half of the apprentices in Alberta alone. Its mission is to produce “Educated, skilled, and successful learners,” and its motto is Discere, Efficere, Praestare (To Learn, To Do, To Succeed).

Its learning resources include: The NAITSA Computer Commons, which provides 24-access to the internet; The Project Factory, a provider of high-end graphics software, scanners and DVD burners; McNally Library, and more than 300 laboratories to help students in practical learning. It also has a variety of food stalls to satisfy every students’ diverse tastes. They include: Common Market, Fresh Express, bytes, Chai's, Bistro!, PLATES, elements, Embers, The Nest, Ernest’s Retail Meat Store, and Bakery sales. There are also the NAIT Tech Store, which is located on the main of floor of NAIT HP Centre, NAIT Tech Store Online, Apple/NAIT Webstore and the NAIT Bookstore. The Athletic and Recreation facilities include: a 50-metre pool, ice arena, gymnasium, weight room, racquetball and squash courts.

NAIT has limited spaces in its homestay program, and their priorities are the newcomers and international students. However, they have housing registry services to help students look for outside residences to live to.

Edmonton is the capital of the province of Alberta. The City of Edmonton covers an area larger than Chicago, Philadelphia, Toronto or Montreal. Edmonton has one of the lowest population densities in North America. In addition, Edmonton's river valley is 22 times larger than New York City's Central Park. The public river valley parks provide a unique urban escape area with park styles ranging from fully serviced urban parks to campsite-like facilities with few amenities.

Edmonton has a northern continental climate with extreme seasonal temperatures, although the city has milder winters than either Regina or Winnipeg, which are both located at a more southerly latitude. It has mild summers and chilly winters, with the average daily temperatures ranging from -11.7°C in January to 21°C in July.